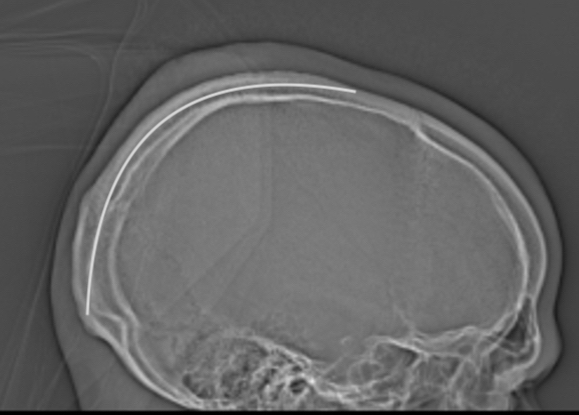 Background:  Like any other body part, head size or the shape of the skull can be too big or disproportionate. Like small area or spot skull reductions larger skull surface areas can be reduced but the issues of access and effectiveness must be carefully considered. Access refers to what the incisional scar burden would be to perform the procedure and effectiveness is the obvious question of how much skull bone (or muscle if it involves the side of the head) can be reduced compared to what the patient aesthetic head shape goals are.

In skull reduction surgery incisional length and location is paramount. The ‘luxury’ of using a bicoronal scalp incision for wide open access and visibility rarely presents itself. Thus the concept of working within elevated scalp flap tunnels must be accepted and a method adopted in doing so that allows for maximal bone removal that creates a fairly smooth reduced bone surface. 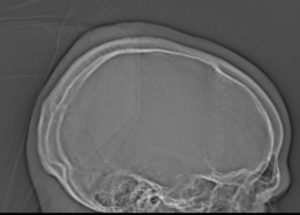 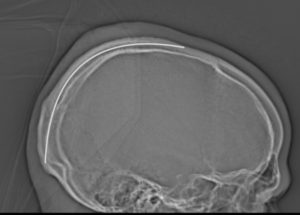 Case Study: This male wanted to reduce his protruding skull areas which were on the back of his head and up onto the crown area onto the back of the top of his head. His lateral skull x-rays showed defined thickened skull areas consistent with what he saw as the enlarged head areas externally. These areas were marked on the lateral skull x-ray (white line) as to what was possible to safely reduce. 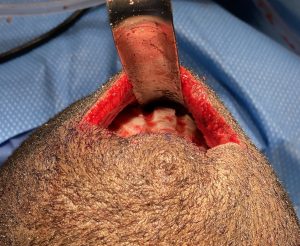 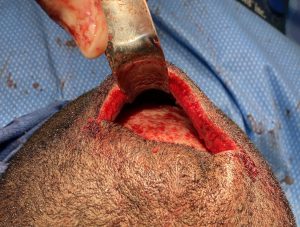 Under general anesthesia and in the prone position a 12 cm curvilinear scalp incision was made. From this incisional access the back of the head was reduced by creating five deep linear cuts through the outer cortical bone in a ray pattern. Once the depth of the cuts was established the intervening bone between them was uniformly reduced. 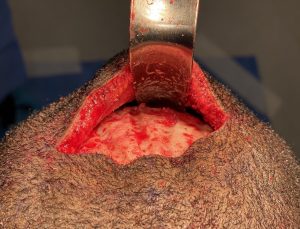 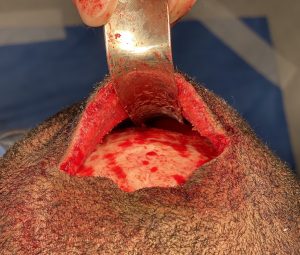 Changing direction the cross and top of the head was similarly reduced , albeit not quite as deep. 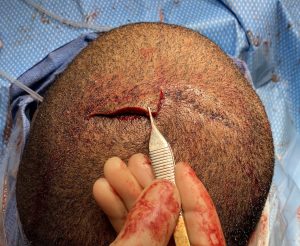 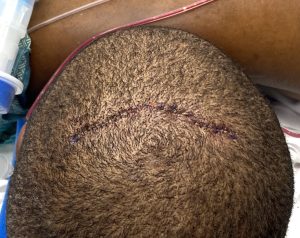 Once the bone reduction was completed redundant scalp tissue was worked out and removed without making the incision any longer. 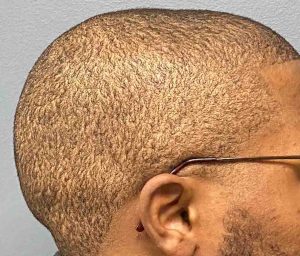 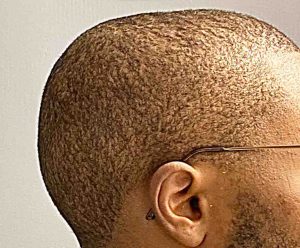 His morning after picture at the time of head dressing and drain removal showed the immediate improvement despite some early swelling.

In large surface area skull reduction the two key issues are incisional access and how much reduction can realistically be achieved. It is an aesthetic operation so the balance between the scar tradeoff and the amount of reduction must be preoperatively considered. While a larger scalp incision may permit greater amounts of skull reduction by surface area that may not always be a good tradeoff for some patients with a more exposed scalp surface. (less hair) As a result for men in particular the length and location of the scalp incision becomes one of the primary considerations. In larger surface skull reductions (two or more surfaces) how to limit its length is to place it midway between the two skull surfaces and do the reductions from more limited scalp flap elevations.

But whether it is a wide open or more limited incisional access, there has to be a method to make the skull reduction in as precise a manner as possible. Creating depth cut lines in the bone in some form of a pattern (e.g., grid or in this case a ray pattern) and then doing the bone reduction between the cut patterns allows for a more predictable reduction with less risk of irregularities.

1) Large surface skull reductions must be planned with an incisional method that limits the length of the scalp scar.

3) To aid in the evenness of larger area skull reductions a pattern of linear cuts are made to initially establish the depth of cortical bone removal.