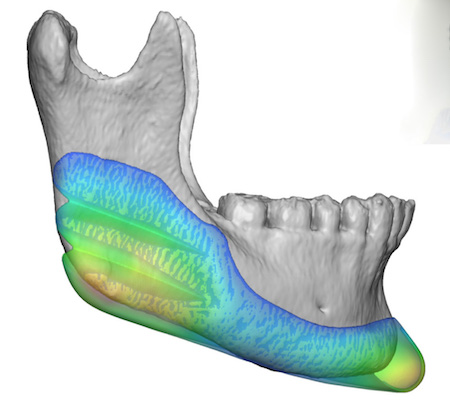 Background: Augmentation of the lower jaw is traditionally done by standard chin and jaw angle implants. While effective in properly selected patients, standard implants are not ideal when jaw asymmetry exists. Standard jaw implants are best thought of as ‘spot’ methods of augmentation that work well when the three corners (chin and two jaw angles) have naturally good symmetry between them. But because the chin and jaw angles have a linear connection between them, when asymmetry is present the connecting inferior borders make the asymmetry more than just a ‘spot’ problem. It is really a jawline problem.

One of the benefits of a custom jawline implant is that it changes/augments the entire inferolateral border of the lower jaw. So it is easy to see why it is more effective at treating jaw asymmetries which uncommonly occur at just one spot or area of the lower jaw. Its wrap around design provides a uniform and connected change in the very visible transition between the face and the neck.

Having a connected implant design that typically covers 20 to 22cms with volumes in the 15 to 20cc range, placement of it has its challenges. One of those challenges is how to get the implant passed under the mental nerve, which is the limiting structure in its successful placement.

Case Study: This male desired an overall jawline augmentation for a congenitally smaller jaw/lower face. He also had some moderate lower facial asymmetry which was seen as a jawline asymmetry on his 3D CT scan. 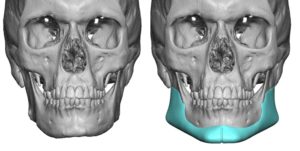 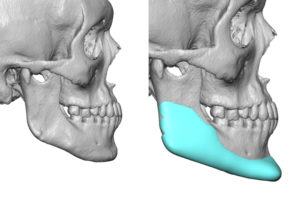 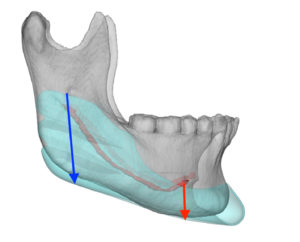 Under general anesthesia a submental incision was used to insert the custom jawline implant.This also required creating implant pockets at the jaw angles through intraoral incisions which connected to the chin. 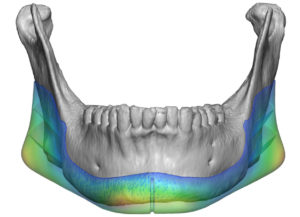 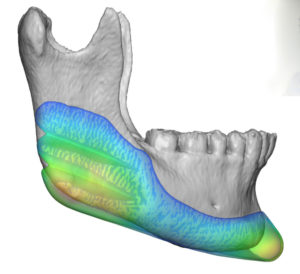 This case illustrates the efficacy of a one piece implant in correcting jaw asymmetries that are associated with the desire for overall jaw augmentation. When the jaw angles become thick enough (10mms or greater) it requires the material release of the internal wedges in the design to get it placed intact.

1) The single implant front to back insertion technique is always preferred for custom jawline implants…if its size permits.

2) The design of internal wedges on the jaw angle portion of the jawline implant enables a higher likelihood of successful one piece insertion in certain patients.

3) The correction of jaw asymmetry from inferior border differences is optimally treated by a complete wrap around jawline implant design.