Alignment of the Nose In Rhinoplasty Using the Fix Down Concept 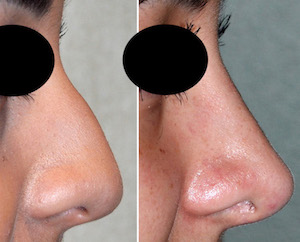 Rhinoplasty is one of the oldest procedures in plastic surgery as the well understood term ‘nosejob’ implies. One of the most basic maneuvers in this surgery is the reduction of a hump to achieve a straighter dorsal profile. Most techniques to reduce a hump are from the ‘top down’ by excision and the nasal bones are then collapsed around the reduction by osteotomies to restore an intact and stable dorsum.

In the February 2020 issue of the journal Plastic and Reconstructive Surgery, an article was published entitled ‘The Alignment of the Nose in Rhinoplasty: Fix Down Concept’. In this paper the author introduces the fix down concept which is  a maneuver designed to improve rhinoplasty results in three anatomical planes as well as symmetry. In over one hundred patients over a nine month period a septorhinoplasty was performed in mainly primary cases (90%) and in a lesser number of revision cases. (10%) The results of this rhinoplasty series had satisfactory aesthetic and functional outcomes, none of which required revisional surgery. Besides the fix down technique adjunctive maneuvers included fit up technique, a variety of bone and cartilage grafts, levator labii muscle plication, and maxillary augmentation/deepening.

The fix down concept is based on the nose being supported by four points on the frontal and maxillary bones. These are the superior pivot point created by the nasal process of the frontal bone, the bilateral inferior pivot points created by their attachments to the pyriform aperture and a central inferior pivot point created by the anterior nasal spine. The concept is that good symmetry and balance is needed between all four points to have a good nasal appearance. The fix down technique releases the entire framework of the nose from these pivot points and fixes it to the midline of the face with the arrangement of soft tissue around it. In effect it creates hump reduction by collapsing the nasal dorsum downward by inferior tissue excision/release.

The author has introduced a novel concept in rhinoplasty with the introduction of nasal pivot points. This certainly has a lot of merit given that these reflect attachments of the nasal bones, base of the nostrils and the septum. Creating balance between these points is what is accomplished by the variety of adjunctive maneuvers used in this study. Taking down the nasal hump through internal excision of tissues to allow the hump to drop down while maintaining its external attachments and convex shape is an interesting concept and a novel approach. It would seem to be best suited to smaller hump sizes. While having its own appeal, this technique appears to be more technically challenging than the traditional components hump reduction approach.