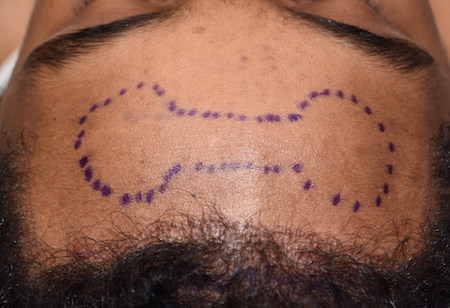 Background: The forehead is a non-conspicuous surface area other then the eyebrows. Between the frontal hairline and the eyebrows the forehead does not usually have any distinguishing features on its underlying bony surface. Eventually with age horizontal and vertical wrinkle lines will develop but these are soft tissue changes.

Bumps on the forehead are particularly noticeable because they stand out on an otherwise smooth surface. Some of the most common forehead bumps are osteomas and lipomas which are frequently surgically removed. They are distinguished because they are singular in appearance.

One very unique type of forehead bump that is paired rather than singular in appearance are forehead horns. These are prominences of the upper forehead that occur bilaterally in the same location. In some cases one forehead horn may be bigger than the other but most of the time they are equal in size. They are often confused with osteomas because they appear as a bony bump. But their paired presence in the upper forehead is what makes their diagnosis.

Forehead horns are developmental in origin as indicated by their correct anatomic name of frontal eminences. Also known as tuber frontale they appear as rounded elevations to the side of the original metopic suture line. Sometimes they appear connected by a raised bar of bone between them, giving them a dumbbell or dopbone appearance. Whether appearing as paired upper forehead bumps or having a dumbbell appearance they are aesthetically bothersome to some patients who notice them particularly in certain lighting.

Case Study: This young male had a dumbbell-shaped bony prominence of the upper forehead. Its prominence was probably about 2mms about that of the surrounding bone. His biggest concern with it was how it appeared when the light hit the forehead from different angles. 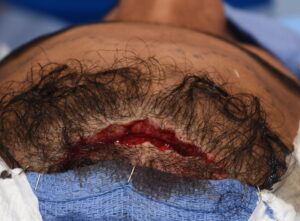 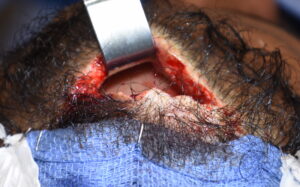 With a small scalp incision placed 1 cm behind the frontal hairline, their bony reduction was mainly accomplished by burring. The narrow tunnel provided by the incision is always a challenge. Smoothing of the bone surface was done by using a #8 nasal rasp prior to closure. 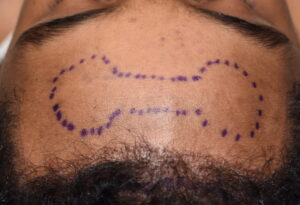 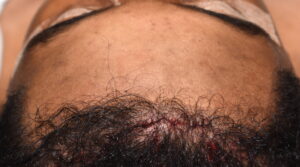 The immediate intraoperative results showed a smooth upper forehead shape both by appearance but also by feel. 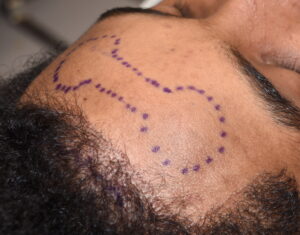 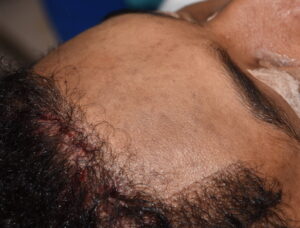 While the burring reduction of forehead horns is straightforward and only a few millimeters of bone needs to be removed, there are several key technical points. First, don’t get the incision too far behind the hairline. The curved shape of the upper forehead can make it very difficult to access the horns if one gets too far behind the curve. Second, protection of the hair around the incision is paramount when working with a high speed drill. You don’t want hair ever to get tangled up in the drill. Third, it is easy to do an over reduction with a drill when just a few millimeters of bone need to be removed. Smaller fluted burrs and rasps ensure a smoother reduced bone surface.

3) Access to forehead horns requires either a hairline incision or one right behind the hairline for access over the curved upper part of the forehead.