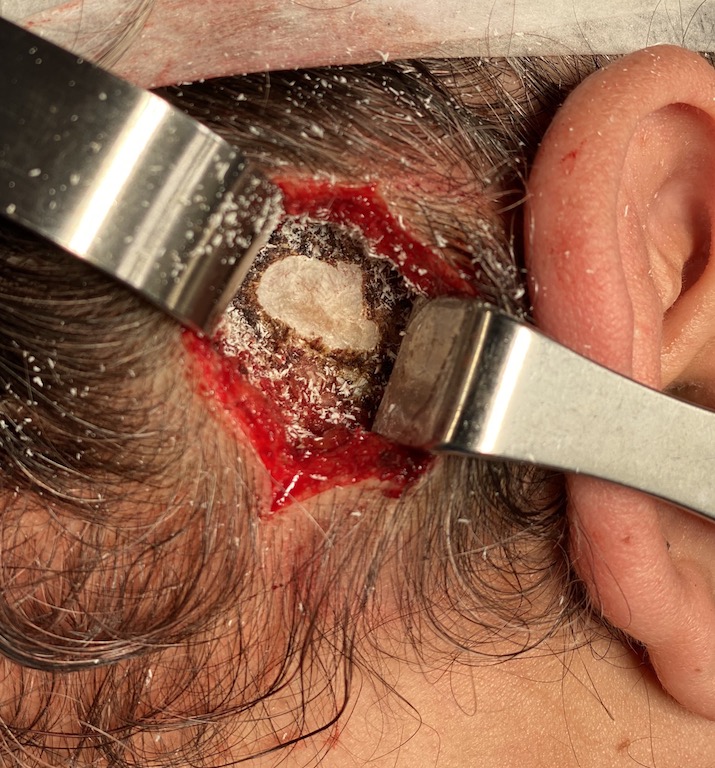 Background: The skull is prone to developing undesired ‘lumps and bumps’ which are aesthetically bothersome because they disrupt an otherwise smooth head surface. Such bony protrusions are abnormally raised spot areas of bone that can be reduced by a direct burring approach. While not pathologic these type of skull protrusions represent overgrowths of normal outer cortical layer skull bone. 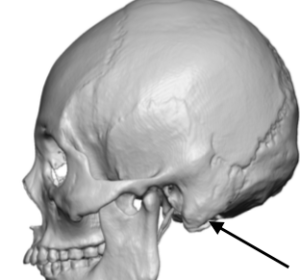 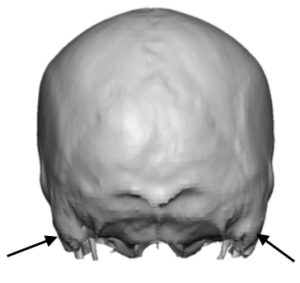 But there is one unique type of bony skull protrusion that is otherwise completely normal but can be aesthetically bothersome to some. The mastoid process is a part of the temporal bone that is located behind the ear. It is filled with air cells which helps to regulate ear pressure through its communication to the middle ear. These air cells are quite large in the superior part of the mastoid process but become much smaller or even absent at its most inferior extent.

The mastoid process is well known to be larger in men than women. This is very similar to that of the frontal sinus where greater pneumatization is known to occur in men, hence the larger external brow bone appearance. While all men have visible mastoid process prominences, some are bigger than others. 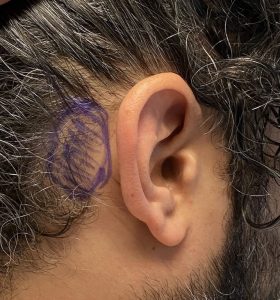 Case Study: This male was bothered by prominent bulges behind his ears. These were most noticeable to him when he had very short hair. He had a prior CT scan of these bumps which showed they were the mastoid process with hair cells. They were marked before by his palpation of their prominences. It serves as the attachment of numerous muscles (e.g., sternocleidomastoid) as well as is filled with air cells. 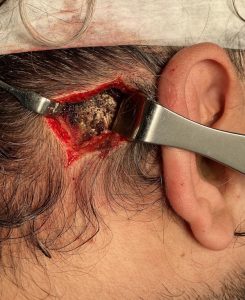 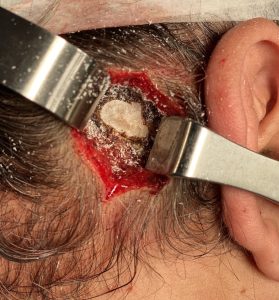 Under general anesthesia and through incisions just behind the occipital hairline the bony prominences were exposed by dissecting down through thick tissues that contained temporal fascia and muscle. A high speed handpiece and burr was used to begin the bone reduction which initially was through compact cortical bone. 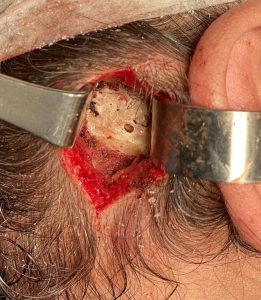 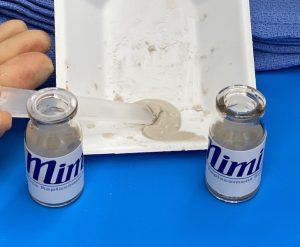 After about 5mms of cortical bone removal, air cells were encountered. Once the air cells were opened the mastoid process was satisfactorily reduced. The open air cells were filled with hydroxyapatite cement in which antibiotics had been added. 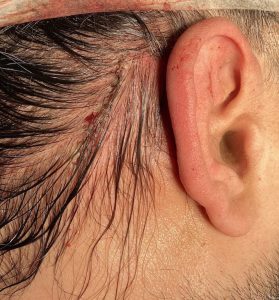 Closure over the reduced mastoid process was done in multiple layers with resorbable sutures. 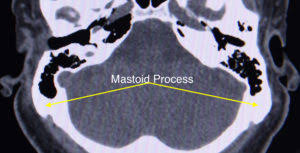 The prominent mastoid process can be reduced so some degree. The presence of air cells limits how much it can be reduced. While some air cell exposure can be managed (hydroxyapatite cement coverage) the goal is not to perform a subtotal mastoidectomy and risk causing mastoiditis) The most prominent part of the mastoid process is often inferior where the least number and size of air cells exist.  A preoperative CT scan can show how much cortical bone thickness exists at its most prominent portion.

1) The mastoid process in many men develops a normal protrusion behind the ear which is most exposed in the shaved head or one with closely cropped hair..

2)The mastoid process is an inferior section of the temporal bone that is partially composed of air cells.

3) Reduction of the prominent mastoid process can be done by a bone burring reduction technique with the awareness that air cells may become exposed and needed obliteration/coverage.