Background: Sleep apnea, specifically called OSA or obstructive sleep apnea, can be a limiting condition that adverses affects one’s daytime life. This is evident by excessive daytime drowsiness and problems in concentrating and memory loss. The causes of sleep apnea have been well documented and can involve multiple sites along the nasopharyngeal airway passages for which various types of surgeries can be done.

In severe cases of OSA, the posterior airway can only be improved by moving the base of the tongue  and soft palate forward. This is done by moving the jaws forward, known as maxillomandibular advancement. By moving the upper jaw (maxilla) and lower jaw (mandible) forward, the entire airway is enlarged. This procedure serves as the most effective surgical treatment for obstructive sleep apnea. It is usually performed in a hospital under general anesthesia and takes about four hours to complete. Patients usually remain in the hospital for several days after the surgery and can return to work weeks later when much of the facial swelling has gone down.

Unlike traditional orthognathic surgery, the integrity of one’s bite (occlusal relationship) is not changed. As both jaws come forward the same bite relationship is maintained through the use of small titanium plates and screws. As a result of these plates and screws, the jaws do not need to be wired after surgery. 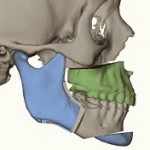 It is generally recommended that the forward jaw movements be at least 10mms. This creates the maximal change that can be achieved by opening the entire airway space. Its success rate has been documented in numerous studies has being fairly high with a greater than 80% to 90% chance of success for patients with an AHI (apnea hypopnea index) less than 15.

However, moving the jaws forward does have aesthetic consequences. The lower face can  become disproportionate to the lower face as the jaw bones come forward leaving the orbital and forehead skeletal structures behind. This can create an undesireable facial protrusive appearance. Proper presurgical selection and patient education with imaging is important to make patients aware of these potential changes.

Case Study: This 26 year-old female suffered from severe obstructive sleep apnea. Sleep studies showed that her ANI was 8 and she did not want to wear a CPAP device. She had significant daytime tiredness with chronic red eyes. She chronically looked very tired. 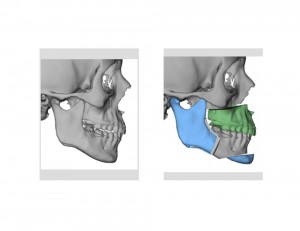 A 3D CT scan was obtained from which virtual surgical planning was done. It was elected to move the maxilla and mandible forward 7mms and combine that with a sliding genioplasty movement of 9mms forward with a slight vertical opening. Cephalometric, model and photographic analysis was also done to see how these changes would look. Her existing bite was already orthodontically corrected into a Class I relationship.

During surgery, a one-piece maxillary advancement was done of 7mms using an interpositional occlusal splint. (computer made from the stone models) Bilateral sagittal split mandibular osteotomies were then done of 7mms placing it into occlusal relationship with the already advanced maxilla using a final occlusal splint. Finally a sliding genioplasty was performed bringing it forward 10mms with 3mms of vertical opening. Al bone segments were secured by titanium plates and screws and no jaw wiring was used after the surgery. 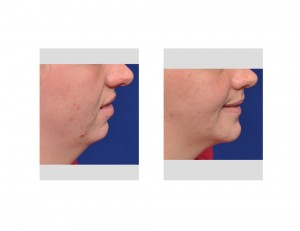 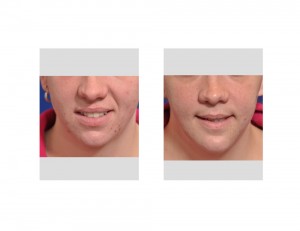 Her after surgery results (a one month) showed a dramatic positive change in her facial appearance with a better facial profile and facial length. This is not surprising given her significant short mandible, chin and neck. Her sleep apnea had also improved with complete resolution of her daytime sleepiness. The tired red eye look was replaced by a more awake white-eyed appearance. 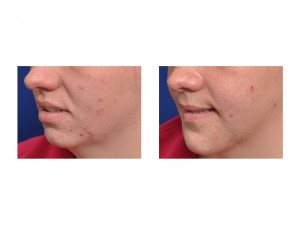 Undesireable facial changes can occur in some patients after maxillomandibular advancement for sleep apnea. Upper lip protrusion, an open nasolabial angle and bimaxillary protrusion can result from this surgery for certain facial types. Those patients who have a preoperative dolichofacial (long)) or brachyfacial (short) facial types will usually have improved aesthetic outcomes from maxillomandibular advancement for OSA.

2) While moving the jaws forward as much as possible gets the best chance for sleep apnea improvement, it can also cause a facial disproportion and an undesireable change in one’s appearance.

3) Moderating the amount of jaw movement to what aesthetically improves the face as well is an important consideration in treatment planning.