Background:  There are numerous types of lumps and bumps that can occur on the skull, many of which have a defined origin and precise location. One of these is the sagittal prominence, a midline crest or ridge of bone that can occur anywhere  along the original sagittal suture line. A distant cousin to the more well known congenital sagittal craniosynostosis it is a more limited outcropping of bone that thickens up the suture line in a limited area but is not associated with any significant anterior-posterior skull length increases.

The elevated sagittal ridge appears to primarily occur in men…but this may be due to the increased exposure of the skull’s shape from hair loss and/or a shaved head. It is quite common that men are completely unaware that they have a prominent sagittal ridge until later in life with thinning hair coverage. The most common location for a midline sagittal ridge is posterior starting at the crown of the head and extending forward. Mid-sagittal ridges are less common and appear centrally in profile between the forehead and back of the head. Regardless of location most sagittal ridges have elevations of 5 to 6mms and can be satisfactorily reduced by a similar amount of bone reduction.

While high sagittal skull ridges can have their profile reduced, there are certain technical strategies to do so to achieve a satisfactory aesthetic result and avoid complications. The two important elements are making an access incision as small as possible and achieving a good reduction that has a smooth shape. 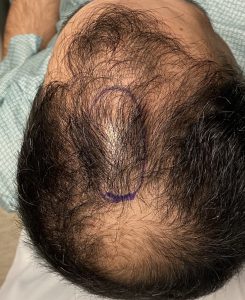 Case Study: This male desired to have a mid-sagittal crest on the top of his head reduced. It measured 8cms long by 2cms wide. He never knew it was present until it become more exposed with the thinning of his hair. It created a prominent midline bulge on the top his head. 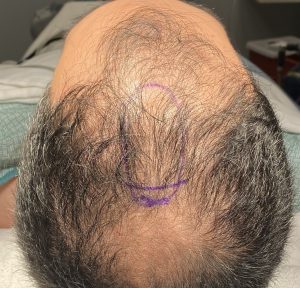 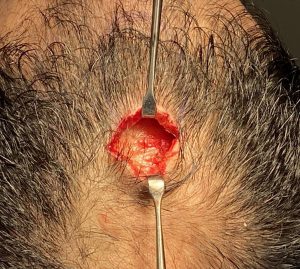 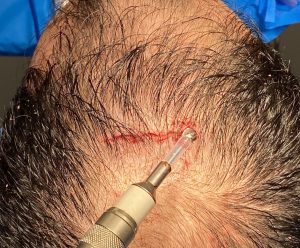 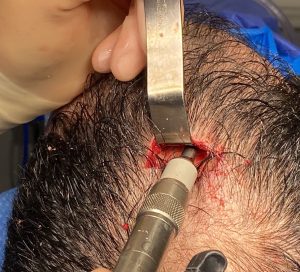 Under general anesthesia a 3.5cm irregular incision was made at the beck end of the sagittal crest. Through this incision wide subperiosteal undermining was done that went well beyond the borders of the bony elevation. Using a high speed handpiece and carbide burr, with a plastic sleeve around the rotating shaft of the burr, the bulk of the bony crest was reduced. 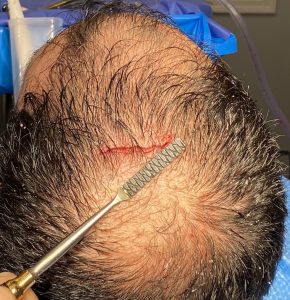 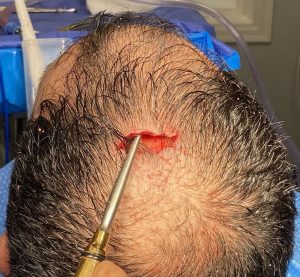 But with limited visibility it is difficult to achieve an absolutely smooth bony contour with a high speed burr. Using a large toothed rasp, the final skull reduction smoothing was done by both visual inspection and external palpation.

A drain was placed and the incision closed using small reservable skin sutures externally. A compression wrap was then applied. 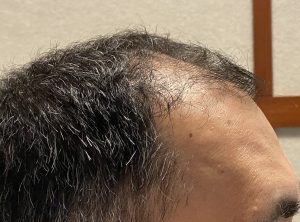 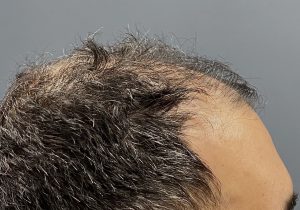 The next day the wrap and drain were removed and the immediate change in his skull profile was seen across the top of his head.

Visible sagittal crests are relatively small but aesthetically significant skull deformities to those so affected. But like all aesthetic procedures the scar tradeoff must he considered carefully and the placement and closure of the scalp incision must be done with this in mind. Working through a small incision and tunnel line of access poses unique challenges in getting a satisfactory bone reduction.

2) A minimal incision tunnel technique can be used at the back end of the sagittal crest to perform high speed burring and rasping bone reduction. (sagittal ridge skull reduction)

3) While high speed burring does a rapid bone removal, getting a smooth polished bone surface requires large skull rasps to do so.