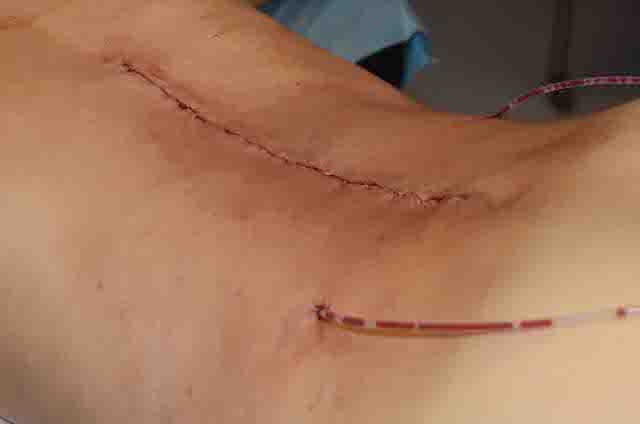 Background: Waistline narrowing is most commonly done through standard body contouring methods such as liposuction and tummy tuck muscle plication techniques. But when those surgical maneuvers are unable to achieve the patient’s goals or they are not a candidate for them due to a lean body frame, then more advanced techniques such as rib removal surgery can be considered.

The term ‘rib removal surgery’ is not entirely accurate as to what is actually done in the procedure to maximize its waistline narrowing effects. Certainly the procedure does involve removal of outer portions of the lower three ribs (10, 11, and 12) but this is really subtotal resection not complete rib removal. There is not aesthetic benefit to removing the part of the rib that extends further inward than the lateral border of the erector spine muscle as it would have no influence on the intent of the procedure. But additional soft tissues procedure are also done which include flank liposuction and latissimus dorsi lateral border muscle resection, both of which have some influence on the projection of the lateral waistline.

When you put all of these procedures together the better term to describe the procedure would be waistline reduction surgery which is more comprehensive as well as implies what the goal of the surgery is. Such waistline reduction surgery is almost always done through small paired back incisions placed more towards the sides of the waistline. Such incisions are centered over the 11th rib to ensure access to both ribs #10 above and #12 below. But other incisional options are possible as the case described below illustrates.

Case Study: This thin young female desired horizontal waistline reduction beyond what genetics and her athletic lifestyle could create. She had a prior history of scoliosis surgery which led her with a fine one midline back scar which ran almost the whole length of her spine. This provided the opportunity to perform the surgery with a different anatomic perspective and the potential for new modifications/insights.

Under general anesthesia and in the prone position, flank liposuction was initial performed which extended around the waistline. The lower half of the midline back scar was opened and skin flaps raised to the lateral border of the latissimus dorsi muscle. (the traditional back incision was marked beforehand just in case the midline back approach did not provide adequate access)  The muscle was then split longitudinally about halfway through its transverse width. Direct access to the lower ribs was then possible by incision the posterior serrates and intercostal muscles. Lengths of ribs #11 and #12 were out to the their cartilaginous tips where they were removed preserving the intercostal neurovascular bundles. Rib #10 was taken as far around the side as possible but not quite as far as its cartilaginous portion.

Once the rib removals were done, their vacant subperiosteal pockets were filled with Exparel-soaked gel foam sponges and the muscles closed over them. Then the elevated outer half of the latissimus dorsi muscle was transposed (medialized) over the inner half of the muscle and sutured on top of it. Lastly over drains vertical segments of sin were removed along both sides of the incision for a final waistline reduction technique.

The midline back approach for waistline reduction surgery employs a longitudinal  split muscle approach for subtotal rib removal. This also allows muscle and skin cinching maneuvers to be done to fully address all components of the waistline…skin, fat muscle and rib tissues.

2) Approaching the lower ribs is done through a split latissimus dorsi muscle approach which then allows for a muscle narrowing procedure as well.

3) The midline back approach also allows for vertical skin removal from both sides of the skin flaps for a further horizontal waistline narrowing effect.