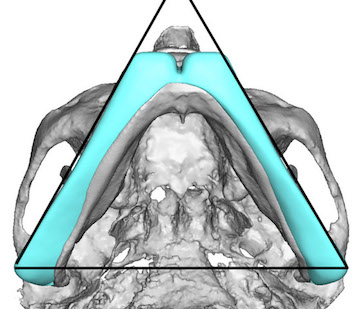 The shape of the natural jawline has many components which are primarily influenced by its three corners. (chin and jaw angles) Each corner has three dimensions and when all put together, including how they connect, determines what the final shape of the lower third of the face is.

The same dimensional considerations applies to the design of custom jawline implants. Each corner’s 3D dimensions have to be determined and then how they connect (linear vs non-linear) can be done. While there is no exact science as to how the implant design should be done, I have learned many basic rules that comes  from seeing a lot of implant designs and their subsequent clinical effects.

One rule that I have learned is about chin widths. Chin width in custom jawline implant designs are deceiving because of the overlying soft tissue which magnifies what lies underneath. As a general rule I don’t usually advocate going over 35mms. This is not an absolute number but more times than not doing so ends up making the chin too wide.

Another method to look at chin width is from below which allows the entire implant to be seen and taken into perspective. One effect of the chin width is in how it influences the rest of the jawline behind it. From this submental view the jawline implant can be traced out in a triangular configuration by making lines between the jaw angles (base) and then up along the width of the chin. (sides of the triangle)

The importance of this triangular assessment of chin width and jawline shape can be seen in a recent case I performed. One year previously the patient had a custom jawline implant placed in which he preferred 50mms of chin width. He eventually determined that it was too wide. He subsequently had a custom jawlineimplant replacement of 35mms chin width. In looking at the differences in the triangular shape, the 35mm chin width was more of an equilateral triangle than when it was wider.  Besides the observation that the more narrow chin width design just looked better, the more equilateral triangle shape confirmed it was more a more harmonious design overall.

Trying to put some science into facial implant designs is not easy since there are no established guidelines for doing so. While it is always tempting to try and apply the principles of ideal facial proportions and the Golden Ratio to such implant designs, this remains theoretically appealing but unsubstantiated. I have had numerous patients who applied such Golden ratio proportions to their implant designs, only to not have liked the result. But much like the shape of the base of the nose in rhinoplasty, I do find the equilateral triangle assessment of the shape of a custom jawline implant from below to have some design value.