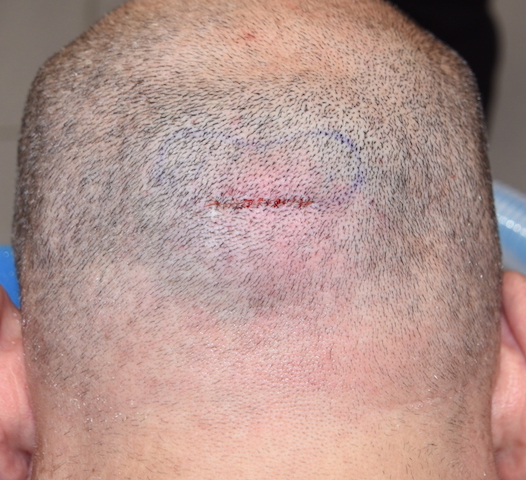 Background: The skull is largely a smooth convex surface with few significant irregularities. Thus when a raised ridge or bump is present it is easily noticed particularly in patients with shorter hair. One of the most common and innocuous skull bumps is known as the occipital knob which appears in the midline of the lower end of the back of the head. Its presence is reflective of an overgrowth of a naturally occurring bony prominence.

Reduction of an enlarged occipital knob, also known anatomically as external occipital protuberance reduction, is one of the most effective of all aesthetic skull reshaping procedures performed. Almost exclusively performed in men, a complete reduction and back of head contouring is possible in all patients.

Because shorter hairstyles dominate the patients who seek this procedure the size of the incision needed perform the procedure is an important part of the procedure. The smaller the incision the better in any aesthetic operation. While scalp incisions typically heal very well, it is nonetheless important to get it as small as possible. The incision just needs to be long enough to permit access for a 360 bone reduction by burring. 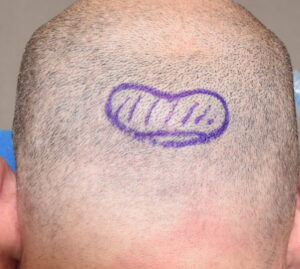 Case Study: This male had long been bothered by the midline protrusion on the back of his head. It was centrally located but was oblong in shape, meaning 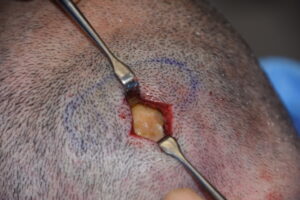 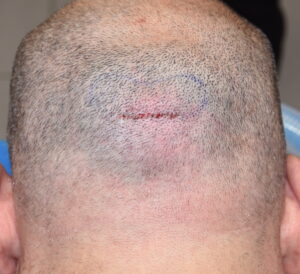 Under general anesthesia in the prone position a 3cm horizontal scalp incision was made right over the prominence along the nuchal ridge. Wide subperiosteal undermining was done to create a large internal pocket. Through this pocket and the limited incisional exposure a burring technique was used to initially make a midline cut to establish the depth of reduction needed. Then each side of the bony prominence was reduced out laterally along the nuchal ridge as well as inferiorly on the underside of the central knob and nuchal line. During closure it is important to reduce the thickness of the scalp by galeal excision over the previously enlarged bony prominence area. This will help the overlying scalp tissues to shrink back down without redundancy. 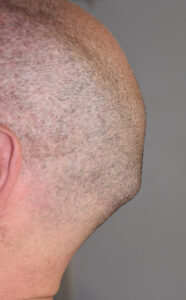 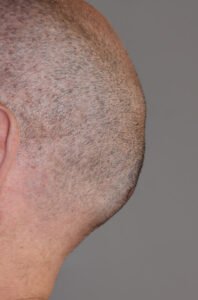 His immediate before and after results showed the achieved occipital knob reduction in profile.

Like the tip of an iceberg the enlarged occipital knob is ways much bigger than it looks on the outside. But this does not mean that a large scalp incision is necessary to reduce it. The key is an adequate internal pocket not a large incision to do so.

1) The occipital knob skull deformity is usually round and centric but can be more horizontally oriented due to nuchal ridge extensions.

2) A very small scalp can be used to remove a skull bone mass that is much bigger.

3) In removing an occipital knob it is important to reduce the expanded galeal layer over it so the skin can contract down around it.