Background:  The sagittal suture is a well recognized connective tissue joint that runs down the middle of the skull between the parietal bones. It intersects anteriorly with the coronal suture and posteriorly with the lambdoidal suture. These front and back intersections also represent the original anterior and posterior fontanelle. (soft spots) The sagittal suture gets its name from its shape, looking like an arrow. Like all cranial sutures it has a tremendously serpiginous pattern winding back and forth along its length.

Pathologically the sagittal suture is best known for what occurs when it prematurely closes in neonates/infants, resulting in a sagittal craniosynostosis deformity. While this is a dramatic head shape malformation, and is often perceived as the only growth aberration that affects the suture, it is far more common to see more limited aesthetic thickenings of it. This may be a form of ‘micro’ synostosis of the suture and is typically associated with some degree of parasagittal deficiencies running along its length. This can give the head a more peaked or inverted V-shape from the front view. This non-rounded head shape with some growth restriction perpendicular to the direction the suture runs supports this limited craniosynostosis hypothesis.

The raised bony ridge running down the center of the top of the head can be an aesthetic distraction for some men who shave their heads or have thin hair cover. I have yet to see a women for treatment of the sagittal crest deformity. It is not that it does not occur in women, it is just more obscured less of an aesthetic concern.

Case Study: This male presented with a shaved head and a visible midline ridge with some parasagittal deficiency. His CT scan showed a thickened sagittal area in cross section and very sclerotic bone along the suture line. 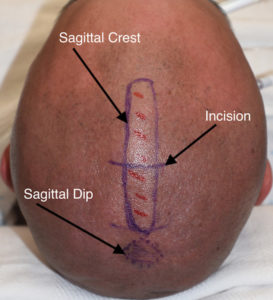 Under general anesthesia a 3.5cm perpendicular incision was made at the mid portion of the sagittal crest, enabling equal access to its length through such a small scalp incision. Initially a groove was made through the crest with a handpoee and burr to mark the depth of reduction needed. (in this case 6mms) Then the posterior crest was reduced back to its posterior end.

Similarly the anterior portion of the sagittal crest was reduced. The bone shavings removed were packed together and showed the length and extent of the bone removed.

A drain was placed prior incisional closure as there is always substantial fluid output during the first 24 hours after the surgery. The reduction in the sagittal crest could be seen appreciated at the end of the procedure in side profile.

Aesthetic reduction of the sagittal crest skull deformity can be successfully done b burring through a small scalp incision that heals well even in the shaved head of the male patient.

1) The sagittal crest skull deformity results from thickening of the sagittal suture/bone between the parietal bones along its length.

2) Aesthetic sagittal crest skull reduction can be done with a bone burring technique through a very small scalp incision.

3) The thickness of the sagittal suture line enables a satisfactory reduction of 5 to 7mms along its length.