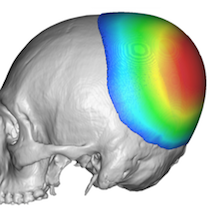 Background: Custom skull implants provide the most effective form of aesthetic head shape augmentation.While the preoperative computer design process allows a skull implant to be created in just about any shape there are limits as to its size or thickness. The overlying scalp does not have limitless stretch and its response to underlying volumetric effects must be considered in creating the implant’s size.

For some patients the amount of skull augmentation they desire many not be achievable within the limits of how much the scalp can stretch. As a result they have to choose between either accepting a less than desired augmentation result with a one stage skull implant procedure or undergo a two stage skull augmentation approach using a first stage scalp expander.

Other patients may believe that the result obtained by the placement of a skull implant that can fit within the limits of their scalp stretch will result in a satisfactory augmentation effect. This may be true initially but as time goes by some patients may eventually decide that they would like more volume. The question the becomes how much more volume can be obtained in a second custom skull implant compared to their first one.

Case Study: This male had a custom skull implant placed two years previously for a back of the head asymmetry as well as the desire for increased overall projection. He went on to heal without any after surgery problems and had a well healed back of the head scar which was difficult to find. He wanted to undergo a second custom skull implant which was bigger in terms of volume. 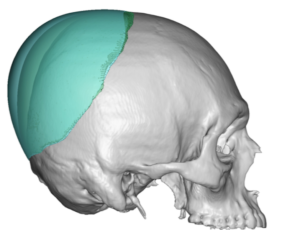 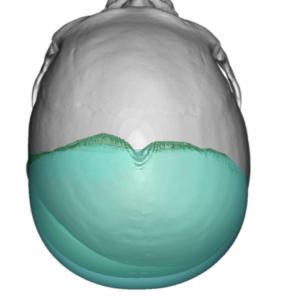 Using his prior 3D CT scan a new custom skull implant design was made keeping an identical footprint from the first design. The projections of the implant was increased up to 19mms with a volumetric increase from 160cc to 260cc. (60% increase) 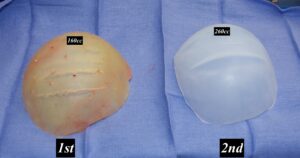 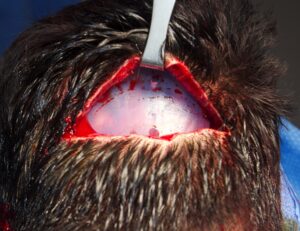 Under general anesthesia and in the prone position, the original back of the head incision was reopened and the indwelling implant removed. The new custom skull implant was folded and inserted…with only opening the original incision 1cm of additional length. The multilayer scalp closure was snug but not overly tight. 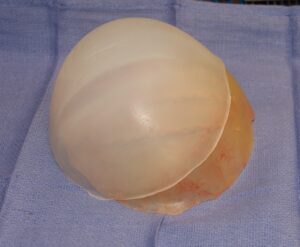 With the request for a placement of 2nd custom skull implant for more volume the considerations include: 1) does the implant footprint need to be increased, 2) how much more volume is needed, and 3) will the incision need to be lengthened to allow it to pass through the incision. The most important consideration is how much more volume can the scalp tolerate. In my experience one needs at least 50% more to make the procedure worthwhile which any first skull implant usually creates since it acts as a static scalp tissue expander. How more implant volume one should attempt is a matter of judgment. But it is fair to say that a 100% volume increase may be too optimistic.

1) An initial custom skull implant can be replaced later with a larger one due to the induced stretch of the scalp from the initial implant.

2) How much larger the skull implant replacement can be can not be precisely predicted beforehand but a 50% to 66% volume increase is a safe preoperative design consideration.

3) Getting the larger skull implant inserted may require some increase of the original scalp incisional length.