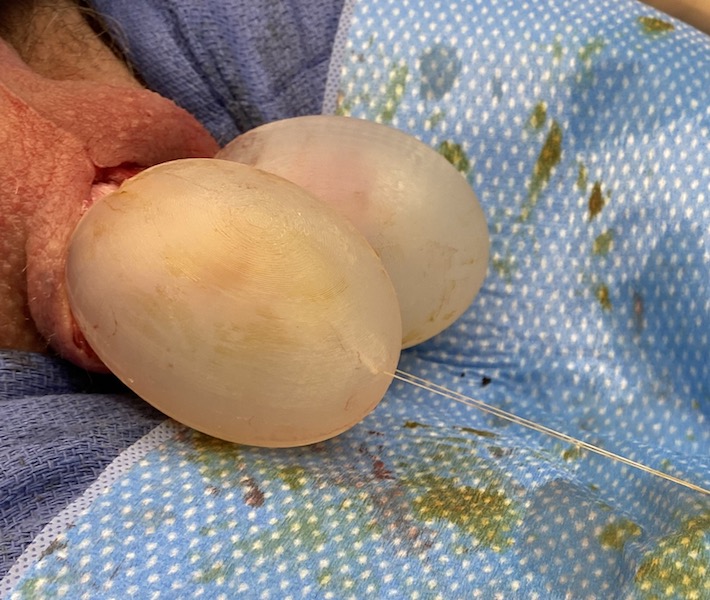 Background: While testicle implants are most commonly associated with the man who has lost a testicle, they are also done for pure aesthetic purposes as well. When used for cosmetic testicular enlargement they are designed to supplement two indwelling natural testicles. This can be done either by a side by side implant technique or a wrap around implant concept, each with their own advantages and disadvantages.

The side by side testicle enlargement technique is as the name describes. Larger testicle implants than that of the natural testicles are placed inside the scrotum. The natural testicles are left in place and the implants displace them out of the way by their size. In essence this is a camouflage technique. It works well when the natural testicle size is fairly small (3.5cms or less) and the patient is comfortable with having ‘four’ testicles of various sizes. It has a very low rate of complications/revision and does not preclude the ability to detect testicular tumors by palpation. 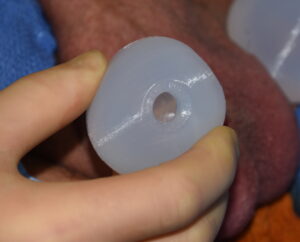 The wrap around testicular enlargement methods requires a specially design implant that has an internal chamber. Into this chamber goes the natural testicle with an opening on one end for the exit of the cord. The shell of the implant that wraps around the testicle does the work of the enlargement. The advantage this method is that there are only two testicle units, each unit being the natural testicle and its implant wrap. Its disadvantages are that it requires a longer surgery to complete and the risk of postoperative displacement of the testicle out of its chamber…requiring a revisional surgery. 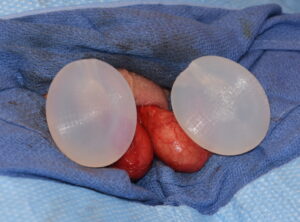 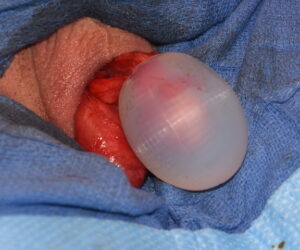 Case Study: This male had wrap around testicle implants done four months previously. He had reported that he felt both testicles had come out of the implants early after surgery but could not get in for surgery any earlier. The implants had caused the desired scrotal enlargement but felt ‘empty’ and one side the indentation of the exit hole of the implant caused a skin dimple. 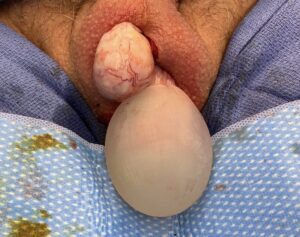 Under general anesthesia the midline scrotal incision was reopened the implant capsules entered and the implants removed. A capsule had lined the entire pocket including over the testices and their cords. The testicles were put back into the implants and seemed like a snug fit. But because displacement had previously occurred re-inertion alone seemed inadequate no matter how it felt. 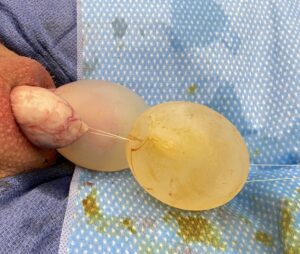 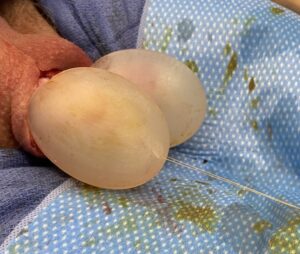 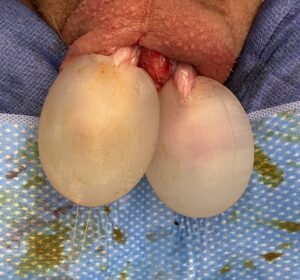 Additional sutures were then placed around the exit hole of the implant at multiple locations between the capsule on the cord and the outer rim of the exit hole for additional support. The implants with the testicles inside were then reinserted and closed.

Despite a small exit hole on a wrap round testicular implant, which is necessary for the cord, it is always possible that displacement of the testicle can occur in the early postoperative period. Once the capsule is more fully formed around the implant the risk of such displacement diminishes. It is not a phenomenon I have seen but a few times and never before on a bilateral basis. These suture techniques between the testicle and its cord to the implant were important in secondary re-insertion and have merit to be used on a primary basis in the future.

The potential displacement risk speaks to why the side by side testicular enlargement is usually preferred where such a risk does not exist.

1) The greatest risk of the wrap around testicular implant is that the testes can slip out of the implant in the early postoperative period.

2) Secondary re-insertion of the testes back into the implant can be done with suture fixation techniques for stability.

3) Most of the time if the testicles are small enough the side by side technique is preferred as it  avoids this potential postoperative complication.