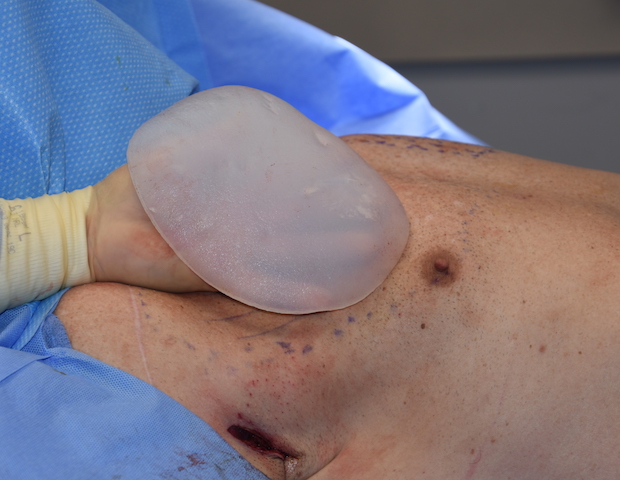 Background:  The purpose of pectoral implants is, of course, to augment the size/thickness of the pectoral muscle. While this is an obvious statement it is an important one and represents a key difference from female breast implants. While both types of implants are placed in a submuscular position, breast implants only reside there partially as their goal is to make an external breast mound bigger not necessarily to make the pectoral muscle bigger even though that occurs in the process.

But to make a male pectoral muscle bigger the implant must stay exclusively within the confines of the muscle borders. And to do so the implant’s shape and footprint (outer perimeter) must stay within these muscular boundaries and determined by preoperative measurements/markings. The primary reason I see patients for pectoral implant revisions is because their implants are either too low, too far to the side or some combination thereof. The basic principle of pectoral implant placement is ‘high and tight’. And in so placing them it is also important to remember that the patient is laying down with their arms outstretched…which mask its easy to dissect too far laterally. (which its why I keep the patient’s arm down at 45 to 60 degrees on the arm board supports)

The shape of the patient’s chest is an important consideration in the implant’s style/shape. Most pectoral implants are not square but have some form of a rectangular shape. While the implant may have been designed to be used in theory in only one orientation, it may need to be ‘re-oriented’ based on the shape of the patient’s chest. Is the chest taller than wider, wider than taller or equally tall and wide? Regardless of how it was made to be used, the guiding principle is keep the implant within the muscle border no matter how the implant needs to be placed. Thus every pectoral implant has four possible orientations.

Besides having an implant that matches the pectoral muscle’s external borders (or stays slightly within them, it is also important to look at the muscle’s thickness and be cognizant of what the patient is trying to accomplish in terms of shape. Most of the time the make patient wants more muscle projection in the upper pole of the chest below the clavicle and along its medial sternal border. Thus usually means this is where the thickness part of the implant should usually be.

Case Study: This very tall thin male had prior shoulder replacement surgery on both sides through an anterior approach. Whether this was the source of his upper chest deficiency or merely magnified his natural thin body frame shape in the chest area can be debated.  But probably it was a combination of both. 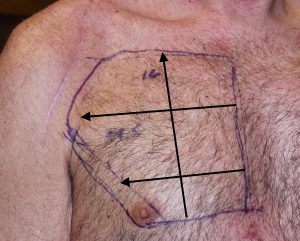 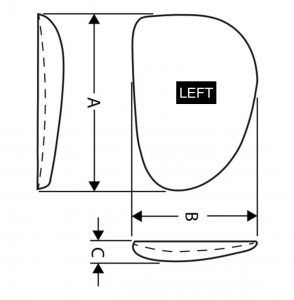 Like all pectoral implant patients it is very important to mark the outline of the pectoral muscle as well as measure its height and various widths. This is what guides the style chosen. In this patient he has a long muscle length (clavicle to inferior border) and a much more narrow inferior width. His goal was to fill in the deficiency of the upper chest below the clavicles as well as along the sternal border.The standard implant choice was a size 3 (410cc) Powerflex II implant placed with his 17cm length vertical. The thickest part of the implant was up top and along the sternal border. The side of the implant reflects which is used on the right and left sides no matter how it was designed to be used.

Under general anesthesia and through a high axillary incision the implant pocket was developed between the pectoralis major and minor muscle pain strict attention to not violating the lateral or inferior muscular borders.

His immediate result showed a normal chest wall contour rather than an obviously augmented chest which was his primary goal.

Like all implant-related surgeries the hardest decision is what is the right shape and size of implant to use? While this can be a hard decision in some patients it is also the most critical. The best pectoral implant surgery ever done will be meaningless if the patient doesn’t like the shape/size of their new chest. But following the guidelines of implant to pectoral dimensions, understanding where the patient wants the fullness and how to orient the implant will work successfully more times than not.

1) Shoulder replacement surgery can be a source of pectoral muscle atrophy particularly at the insertion end of the muscle.

2) In tall thin patients the pectoral muscle shape is vertically longer than its width and pectoral implant style and orientation must take this into consideration.

3) In muscle atrophy the thicker part of the implant should be at the superior end and the thinner part at the bottom.