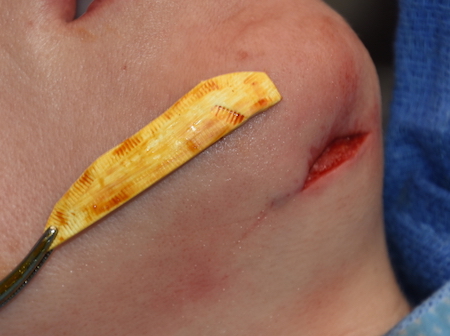 Background: The chin is a jutting facial feature that has three distinct dimensions. Horizontal projection, vertical height and transverse width are all chin features that can clearly be discerned. Because it is a protruding 3D structure, changing one of the dimensions will visually cause a change in the other ones. For example if the chin is made vertically shorter it will appear wider. Conversely vertically lengthening a chin will make it appear more narrow.

Case Study: This female had a prior sliding genioplasty which left her feeling that her chin was too far forward and long. She underwent a subtotal sliding geniopalsty reversal which helped but still left her feeling it was too vertically long and too narrow. The key issue on her chin width is that she liked best when the early swelling after surgery was still present.

Under general anesthesia the chin bone was exposed through a submental incision. The lower end of the fixation plate from the sliding genioplasty was seen and the screws and lower legs of the plate were removed. This provided space to then remove 5mms of vertical bone height through a horizontal osteotomy with a reciprocating saw.

To make the chin physically wider 2mm thick implants were fabricated from an ePTFE block to be placed on the lateral chin bone surface covering the prejowl area. To hold them into position a single 2 x4mm screw was used at their anterior end.

It is not common that a female wants her chin to be wider as it is shortened. It is far more common to have a request to make the chin less wide as it is vertically shortened. But using her swelling immediately after prior chin surgery as her preferred look confirmed that such added width is needed.

3) Ensuring that the shortened chin becomes wider can be done by adding onlay implants out laterally to cover the prejowl area.