Background:  The skull develops and is composed of multiple plates of bone that are connected by various suture lines. Developmentally the suture lines have the immediate effect of allowing bone overlap so the head can get through the birth canal. Secondarily it allows the skull bones to grow with the expanding brain and, once its growth is completed, the suture lines fuse go on to fuse. Although fused (no longer permitting growth) almost all sutures lines can still be seen in the adult skull throughout their life..

The most anterior of these inter bony skull interdigitations is the coronal suture. This horizontally crossing suture separates the two parietal bones from the frontal bone anteriorly. It also is part of the makeup of the original anterior fontanelle (soft spot) which is created at the intersection of the coronal, sagittal and metopic sutures. While the anterior fontanelle is closed at around 18 months of age the coronal suture is usually fused at around 24 months of age.

Once fused the skull surface across the coronal suture line has a smooth contour on both sides. But in some people, for reasons unknown, the coronal suture line can be indented across its length across the top the head. This has no functional significance only an aesthetic one.  I call this the coronal dip skull contour deformity. It usually becomes an aesthetic concern in the male with very short hair or who shaves his head in which the indentation is visible. 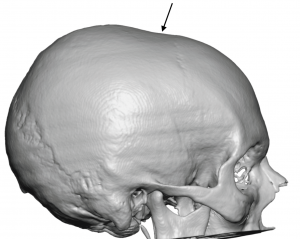 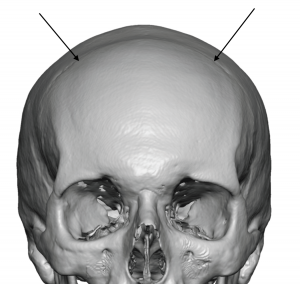 Case Study: This young male with very short hair had an indentation across the anterior top of his head. A 3D CT scan showed a horizontal indentation which paralleled the course of the coronal suture line. He desired to have a smoother contour across the coronal dip area. 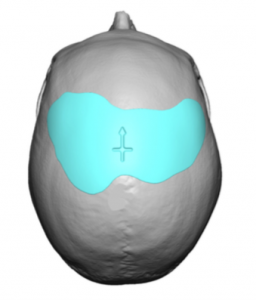 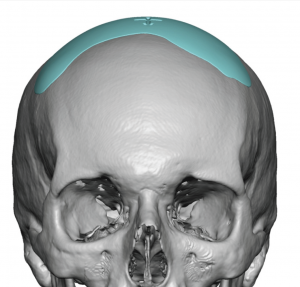 A custom implant was designed to fill in the dip and create a smooth contour. To the human eye this skull indentation appeared fairly even and smooth. To the computer, however, the two sides of the coronal dip were anything but symmetric. 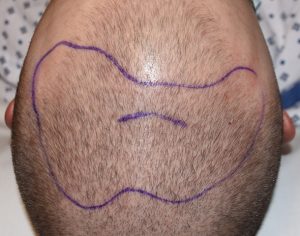 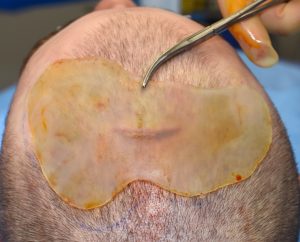 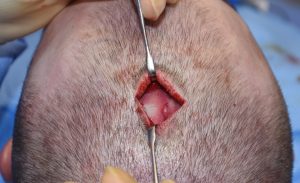 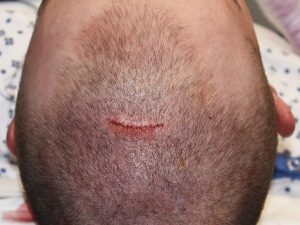 Under general anesthesia a 3 cm incision was made in the midline paralleling the coronal suture line. A subperiosteal pocket was made beyond the borders of the implant design. The implant was passed through the incision, positioned as designed, and secured with two microscrews. 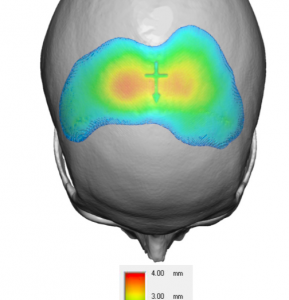 While the coronal dip is a fairly shallow contour defect (4mms or less), it is broader than it looks with more irregularities than the eyes think is there. By volume the implant was 13ccs, an amount that is hard to imagine when thought of as 13 syringes of injectable filler to achieve the same effect.

1) A horizontal indentation that occurs across the top of the skull is most frequently associated with the coronal suture line.

2) This elongated but thin skull indentation is best treated by a custom skull implant approach.

3) Despite the relatively large surface area of the coronal dip skull implant it can be placed through a remarkably small scalp incision.