Background:  The perception of the lower jaw in males is often perceived as one of size. A ‘big’ lower jaw is often seen as a strong male facial appearance. And while there is some truth to that belief, it is neither applicable to all men or all jawlines. Shape sometimes can be as important, if not more so, than size alone.

The shape of the lower jaw is primarily determined by its three corners, the chin and the two jaw angles. From a geometric standpoint, the lower jaw is a triangle which is either a proper triangle the viewed from below or an inverted triangle when viewed from above. The size and shape of each of these corners is largely what determines its shape. Thus when making an improved jawline the size and shape of the rest of the face to which it will be attached must be considered. 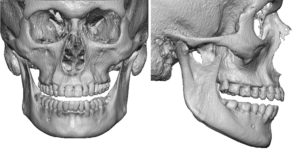 Case Study: This young male desired a stronger jawline but was concerned about doing so given his otherwise small face. His 3D CT scan showed a ‘soft’ lower jaw with rounded jaw angles and chin. Such jawline shapes are often more typical of females than males. 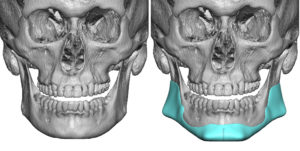 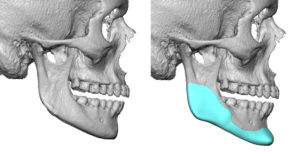 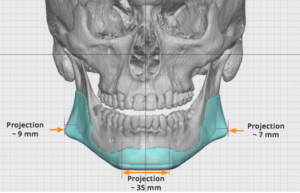 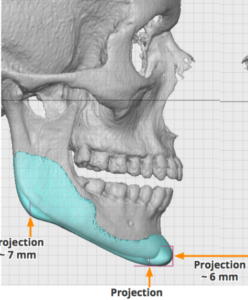 Using his 3D CT scan a custom jawline implant was designed to bring some angularity and more defined shape to the central chin and bilateral jaw angles. They were more squared out but only had a thin connection between them so the lower jaw did not appear too big and out of proportion to the rest of his face. 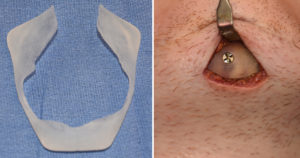 Under general anesthesia and using the standard three incisional approach the custom jawline implant was placed as a one-piece implant and secured with screws at each ‘corner’.

There remains no exact science how to design any custom facial implant and jawline implants are no exception. But experience has shown certain ‘standard’ measurements and relationships that are useful as well as an overall gestalt about how to make it fit the face.

1) Many naturally-shaped jaws, particularly those that have a softer/smaller appearance have ‘rounded corners’.

2) Creating a more defined or sharper appearing jawline is often as much about sharpening the corners than it is about creating a much larger overall size.

3) The ‘sharpening’ jawline implant creates more angular chin and jaw angle shaped with as thin connector between them.