Background: The aesthetic desire for many custom facial implant patients is to have a noticeable but natural looking result. While one could argue that is a very subjective desire, and it is, but what that means to me is that it is a result that is not too big. Thus in the design process one has to be vigilant about the many parts of the design which collectively can create an external facial appearance that ends up being bigger than the patient wants.

Occasionally, however, some patients do want a significant or large result. In men this is seen in custom jawline implants. Because it is the largest facial implant possible by surface area it can have a powerful effect on the appearance of the lower third of the face. Very strong jawline results are particularly judged by the projection and width of the chin and the inferolateral increase and squareness of the jaw angles. These are the type of changes that in preoperative counseling the patient expresses a desire that ‘more is better than less’.

In large custom jawline implants, getting a larger result often requires that the patient already has existing implants. This becomes particularly relevant in the chin area where a tight soft tissue pad presents the most restrictive obstacle to significant expansion of any area along the whole jawline.

Case Study: This older male had a prior history of a chin implant, sliding genioplasty and an implant overlay. He had been trying for twenty years to have a bigger and ore defined jawline. At the same time to go with his new jawline he also wanted more prominent brow bones to create an overall more masculine look. 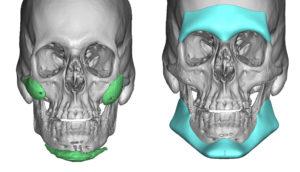 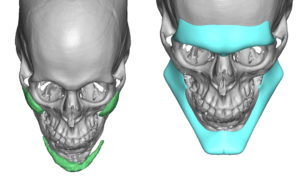 His 3D CT scan showed indwelling genioplasty plate and overlay chin implant as well as cheek implants. A large custom jawline implant was designed to really square out his chin and give him jaw angles and a jawline that he never had before. A custom brow bone implant was also dine with 6mms of brow bone projection.

Under general anesthesia the jawline implant was placed through a combination of bilateral intraoral vestibular and a submental skin incision in a split back to front placement technique. The custom brow bone implant as placed endoscopically through a small scalp and upper eyelid incisions. 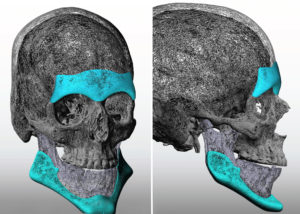 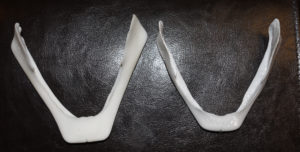 The concept of a large custom jawline implant does have some subjectivity to it. But when the chin width exceeds 40mms and the jaw angles have a 15mm width, what connects the two will have enough material to substantially widen the lower face. When comparing this implant design to a more average one the difference is volume of material can be better appreciated. Placing such an implant size will almost always require some pre-expansion of the soft tissues of the chin from prior surgery.

1) The concept of a large custom jawline implant may be somewhat subjective but it is defined by certain dimensions of the implant that are known to place the soft tissues under considerable stretch.

2) The chin in particular is an area of an implant design that can become noticeably large and is sensitive to oversizing.