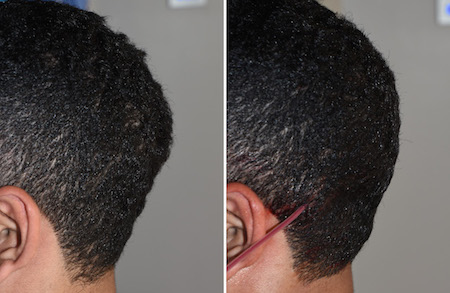 Aesthetic protrusions on the back of head come in different varieties but they fall into two main categories; 1) expansion of the intracranial space resulting in a true occipital bone prominence and 2) overdevelopment of natural external bony landmarks. (e,g, occipital knob) The latter can always be burred down completely as they are composed of excessive solid bone and intracranial space violation will not occur. The former, however, is limited by the thickness of the bone and its outer cortical layer…which is the limit of safe bony reduction.

When reducing occipital bone reductions the preoperative decision resolves around whether enough of the protrusion can be reduced to make the procedure worthwhile. A preoperative lateral skull x-ray may be helpful in this regard but, in the end, the most important decision is based on experience and computer imaging.  If I can demonstrate what I think is the minimum outcome (not the maximum) that is likely that helps the patient decide if the most assured result is worth the effort. 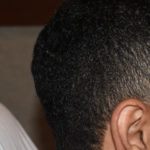 Under general anesthesia and in the prone position, a horizontal incision was made at the bottom edge of the protrusion.Through a limited 8cm long scalp incision, the entire outer cortical layer was removed by a high speed burring technique. Bone bleeders were stopped with bone wax and electrocautery. The diploic space was seen and barely entered. 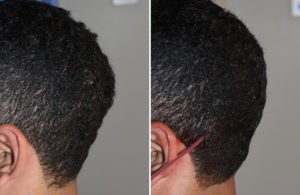 Scalp closure was done over a drain which was removed the following day.. The reductive effect could be immediately appreciated with a flattening of the central protrusion.

Occipital bony protrusions can be reduced… the only question is by how much and does that amount make it worthwhile for the patient. Discrete centralized occipital skull reductions have the best chance to achieve adequate aesthetic improvement.

1) Protrusions on the back of the skull are not uncommon and can have various centralized locations.

3) The central occipital protrusion can be reduced down to the diploic space which is usually enough to create a visible aesthetic improvement.