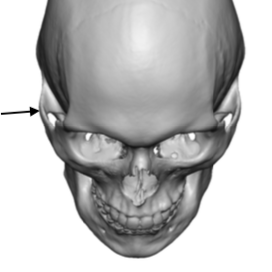 Background: While the cheeks are generally perceived as a mound-like shape of varying sizes below and to the side of the eye, it is anatomically more complex. It is a horizontally oriented bone where its main mass, the zygomatic body, serves as the interface between the orbital and sinus cavities and where three of the four bony attachments are. It is this area of the cheek that creates much of the aesthetic midface effects. It is also the area historically where various styles and sizes of cheek implants are designed to augment.

The smaller part of the cheekbone is the thin zygomatic arch process which extends horizontally towards the ear. Much like a bridge, and hence its name zygomatic arch, it spans over the underlying temporalis muscle and connects eventually to the temporal bone. Because of its bridge-like shape it creates width to the midface through its varying degrees of convexity and as being the attachment point of the masseter muscle. 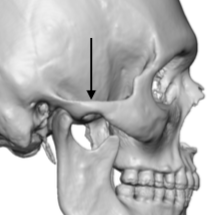 For some the most lateral or widest projection of the zygomatic arch is at its central location at the zygomatic suture line. But in others the widest part of the arch is closer to the temporal bone and sticks out just in front of the ear above the temporomandibular joint. Its prominences prevents an otherwise smooth transition between the lower end of the temporal hollow and the midface below the arch. For some this posterior zygomatic arch prominence may be aesthetically bothersome. 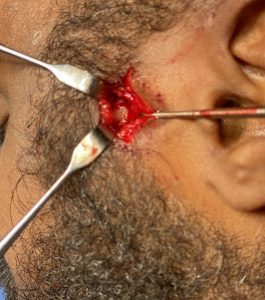 Under general anesthesia a 1 cm vertical skin incision was made at the backside of the sideburn hair behind the prominent bony bump. Blunt dissection was done down to bone which was the lateral side of the glenoid fossa. Subperiosteal dissection was carried forward until the back of the zygomatic arch was identified. This was confirmed by being able to get around with sides of the bone. 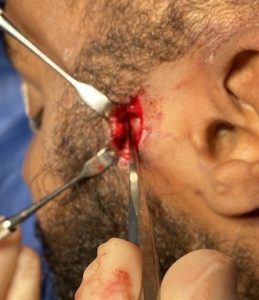 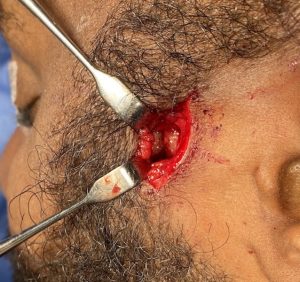 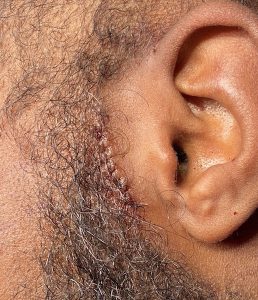 Only the skin incision was then closed. Trying to close the deeper layers puts the frontal brach of the facial nerve at risk. 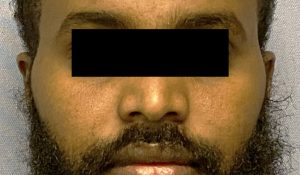 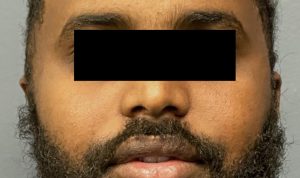 The before and after effects of the posterior arch osteotomy could be seen one day after the procedure.

The posterior zygomatic arch osteotomy has its origins from the more well known cheekbone reduction surgery. It may be thought that if the anterior cheekbone osteotomy is not done with it that the bone is not capable of being moved. But this is not true. The thinness of the arch allow it to have some flexion when its posterior attachment is cut. It is also possible that it moves inward because it develops a greenstick fracture at the mid-zygomatic suture line. Either way it is an effective technique for reducing the prominence of the undesired width of the posterior zygomatic arch.

2) Reducing the width of the posterior zygomatic arch can be done by a direct osteotomy and in fracture technique.

3) The posterior zygomatic arch osteotomy cheekbone reduction technique can be done safely without injury to the frontal branch of the facial nerve.