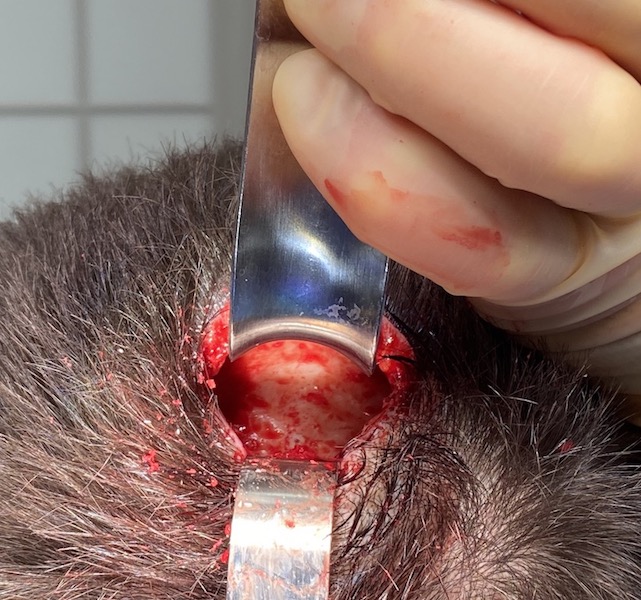 Background: The skull is a collection of multiple larger pieces of bone that are connected through a network of sutures during development. These various sutures and how they develop and connect create the opportunities for a variety of external skull surface irregularities. One such skull irregularity is that of the raised sagittal ridge or crest.

The raised sagittal suture typically exists between the anterior junction with the paired coronal sutures and ends posteriorly at the crown area. This suture line runs between the original soft spots seen in a baby’s head. (anterior and posterior fontanelles) The sagittal suture line thickens creating a peaked or triangular head shape from the front view which can be aesthetically bothersome to those affected. This has always been seen in men and I have yet to have a women present for sagittal ridge reduction…but this may just be a reflection of better hair coverage of females.

While the concept of reducing the high sagittal ridge is straightforward and safe because the bone is thicker. How to do the reduction through an acceptable small scalp incision, however, is not as obvious.

Case Study: This male was bothered by a palpable posterior sagittal ridge. Because of his hair coverage his aesthetic concern was more of how it felt than how it appeared. He has always bee able to feel it since he was a child. The sagittal ridge ended anteriorly creating a bit of a sagittal dip and posteriorly at the crown area. 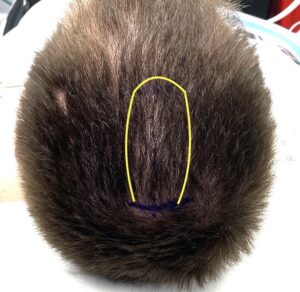 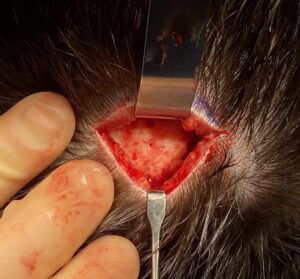 Under general anesthesia a 4cm scalp incision was made at the back end of the high sagittal ridge. Upon visualizing the skull surface the end of the thick sagittal suture line could be seen. Wide subperiosteal dissection was done extending way beyond the raised ridge on both sides. This permits retractors to be placed and turned to make room for the high speed drill. 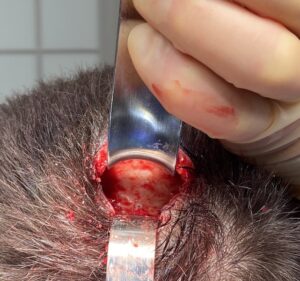 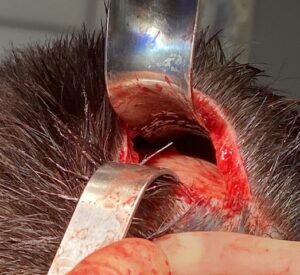 This dissection and retraction create a tunnel access through which a high speed drill can be placed to burr the ridge down. The depth of the sagittal ridge reduction is started right at the incision to establish the safe bone depth. It is then extended anteriorly keeping the reduction depth the same but also keeping a bit of rounded surface contour and not a flat one. (the top the head is not flat but rounded) 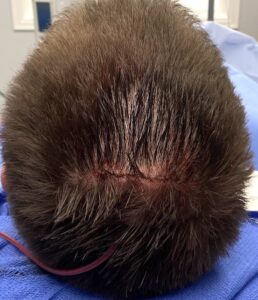 Once the sagittal ridge is adequately reduced, the pocket is flushed out, a drain placed and the scalp incision closed in two layers. The drain is important and the bone surface tends to weep small amounts of blood after surgery. Removing that fluid collection for the first night after surgery is preventative of a fluid buildup and a temporary soft squishy raised sagittal ridge.

Reducing the high sagittal skull ridge is done by removing 4 or 5mms of bone along its length. This would be very easy to do through long scalp incisions but these would not be acceptable in an aesthetic deformity, particularly in a male with a shaved head or short hair.  The tunnel technique makes this type of skull reduction and the scalp scar aesthetically acceptable. But it requires proper instrumentation and patience ti successfully complete.

2) The high sagittal ridge exists between the anterior junction with the bilateral coronal sutures and the posterior location of the original posterior fontanelle at the crown skull area.

3) The high sagittal ridge can be successfully reduced using high speed burring through a tunnel technique.