Background: Patients seek augmentation of their head shape for a variety of reasons. For some it is correction of a flat or deformed head shape. For others it is to make a smaller head larger with a concomitant improvement in its shape. But regardless of the reason the limitation of the magnitude of the change is the how much the scalp can stretch to accommodate it.

Due to the need for adequate scalp tissue to cover it, some patients choose a two stage approach to their skull augmentation needs. It has been determined that the size of the custom skull implant (usually greater than 12mm to 15mms in thickness) can not be done in a single surgery….the scalp will simply not stretch that much at once.

But other patients want to see if the immediate insertion of a custom skull implant is adequate. Or some patients that have had an indwelling implant later determine that they want a new and larger one. In essence they have accommodated to their new head shape and desire further change. 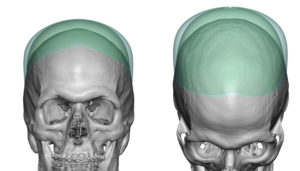 Under general anesthesia and using the original scalp incision without an increase in length, the custom skull implant was inserted and positioned. But doing so was not easy and requiring two implant manipulations. First internal wedges (four in number) were cut on the inner surface of the implant. This enabled it to be rolled and inserted. Once inside the implant was unrolled but moving it around in the tight space was difficult. A slit was made in the implant trough which a long curved browlift elevator was inserted. This was like putting a handle on the implant. This enabled it to be turned and positioned in the midline as determined by the compass marker on the implant.

Each skull implant creates enough scalp stretch to allow a bigger implant to be subsequently placed. As long the new implant is not more than a 30% to 40% increase in volume, the challenge is in its insertion and positioning.

2) Each skull implants allows for a one-third or more increase in size for a new implant.

3) Th challenge in placing larger skull implants is introducing them them through the same-sized scalp incision.