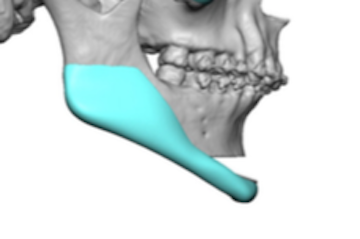 Background: Aesthetic augmentation of the jawline (lower jaw) is primarily done by implants. For the back part of the jaw (jaw angles) there are no autologous options so implants remain the only method. The chin, however, is different where implants and osteotomies have existed for a long time. This means in total jawline augmentation one could have it either done by three separate standard implants, two jaw angle implants and a sliding genioplasty or a total wraparound jawline implant. These three options are fairly well known and widely used.

But there is also a fourth option that this often overlooked which combines a bony genioplasty with custom jawline implants. What would be the reason for this type of jawline augmentation approach? It all comes down to what dimensional change is needed for the chin, specifically does it need a significant vertical lengthening change. While modest amounts of vertical chin lengthening can be achieved by an implant there are limitations to what can be achieved. Because the soft tissue chin pad must be elevated off of the bone  and if an implant is then placed on it, the soft tissue chin pad must be pulled back over it. In the vertical dimension this is not assured when the vertical lengthening effect becomes more than just modest. In my experience once 7mms or more of vertical chin lengthening is needed I would not count on getting the soft tissue chin pad pulled down back over it in a smooth fashion. This can be overcome by.bony genioplasty for the lengthening which does not have this soft tissue restriction as it naturally follows the bone downward due to retained attachments.

With an autologous vertical chin lengthening the rest of the jawline augmentation can be done with implants. But it will require custom implant designs to create the desired jaw angle effect and then have the implant come forward to blend into the relocated chin bone for a complete jawline augmentation effect.

Case Study: This young male sought a total lower jaw augmentation of which his greatest  deficiency was in the vertical dimension, particularly that of the chin. 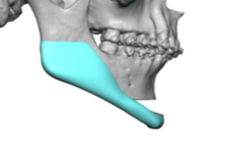 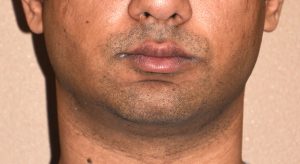 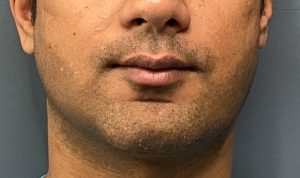 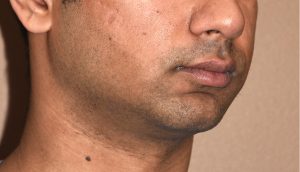 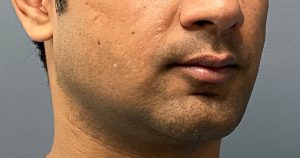 Both the bony genioplasty and custom jaw implants were done during the procedure, all through an intraoral approach.His six months result showed the very visible lower facial change for this auto-implant lower jaw procedure. 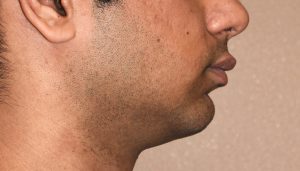 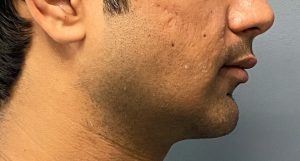 In this combined autologous-implant approach for a total lower facial reshaping result it has several advantages. The first is that it can most effectively achieve the dimensionally stressful tissue expansion effect of the chin whereas an implant may not be able to do so and as a higher risk of complications. The second benefit is the entire procedure is performed through an intraoral approach. Lastly, if the worst medical complication occurs (infection) not all will be lost unlike a one piece wrap around jawline implant.

1) Significant vertical lengthening of the chin is best done by a bony genioplasty and come be combined with implants for a total lower jaw augmentation effect.

2) Preoperative computer designing can be done for both the bone and implant to optimize their potential integration during surgery.

3) The custom implants provide a good integration with the bony genioplasty to create a smooth jawline front to back.