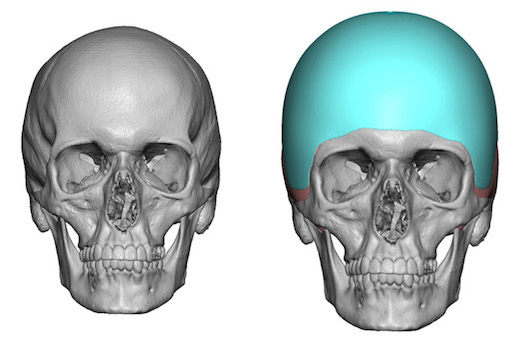 Background:  Head size is typically determined by a circumferential measurement taken just above the ears. In adults this can be anywhere from 55cms (small) to 60cms which would be considered large. Gender differences also expectedly exists with men’s head  size being about 10% bigger than females in average. (men = 56 – 60cms, women = 53 to 55 cms) While this is an effective approach for determining hat or helmet sizes, it is a less effective determinant than how a patient perceives their own head size.

My observation is that when a patient thinks their head is too small it usually is when compared to the rest of their body or even the face. The circumferential measurement may be in the low normal or below the normal range for their gender, but where is the head is really small is above this classical measurement line. The slope of the head at the temporal, forehead or occipital area can be more inwardly inclined which make the head look really small. This is best appreciated in a 3D CT scan which sees beyond the overlying hair and scalp.

Making the head bigger requires an augmentative approach for which only a custom skull implant can create an overall enlargement. Such a head enlargement requires the implant to extend beyond just the bone surface of the front, top and back of the head  and lie one top of the temporal muscle fascia on the side of the head. This type of implant design looks very similar to a helmet. Putting in such a skull implant that covers a large surface area requires the overlying scalp to stretch and accommodate it. To which there are limits which must be considered in the implant design. 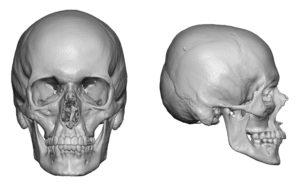 Case Study: This young male presented for an overall head size increase. He had a lot of hair but it was clear his face was small in size as well as was is head the his hair was pulled back. His 3D CT scan  showed a skull that did not look particularly abnormal with the exception of the back which showed lack of projection and an inwardly angulated lambdoidal suture line. 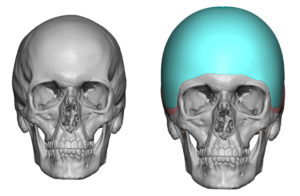 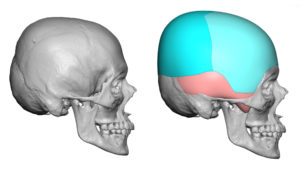 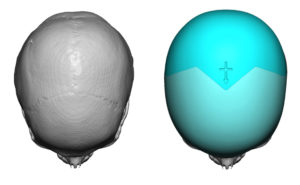 A skull implant was designed that covered his entire head with the thickest projection at the back and upper the vertex. To keep the head shape proportionate it is necessary to have it extended down over the forehead and cover most of the temporal area. In essence a near total skull coverage making it look like a helmet. The total implant volume was 267ccs. 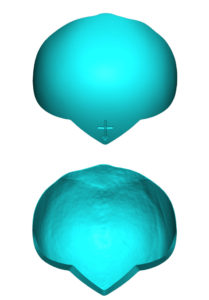 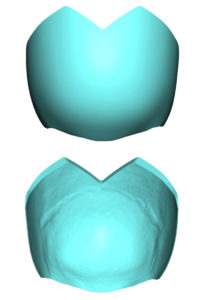 To avoid a full coronal scalp incision for its placement, it was designed as a two piece implant. The two pieces could be passed through the incision independently and then assembled once inside. 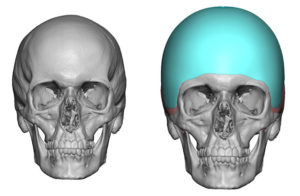 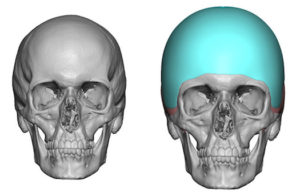 Under general anesthesia and through a scalp incision across the top of the head between the bony temporal lines, subperiosteal dissection was done on the bone surface and on top of the deep temporalis fascia. The implant was inserted in two pieces and then reassembled along its W-shaped design interface using sutures and screws. 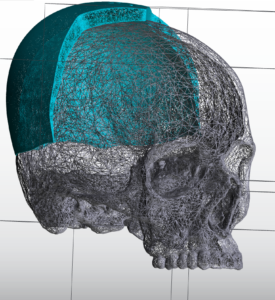 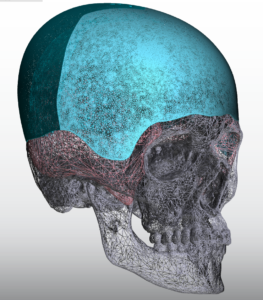 Custom skull implant designs to increase the overall size of the head can be effectively done within what the patient’s scalp elasticity will permit. There is no scientific method to know how much implant anyone’s scalp can safely accommodate. Age, skin pigmentation/hair color, and external scalp mobility are helpful indicators of the scalp’s ability to stretch. But only implant insertion can make the ultimate determination. Beyond imply size one also has to think about how the implant is going to get past the incision. This is the value of a two-piece design approach with intraoperative in situ assembly.

1) The perception of head size is determined more than just by a circumferential measurement alone.

2) Increasing overall head size and shape can be done by a custom skull implant that covers most of the skull’s surface.

3) To keep the scalp scar as small as possible, the custom skull implant can be designed in two pieces for placement.