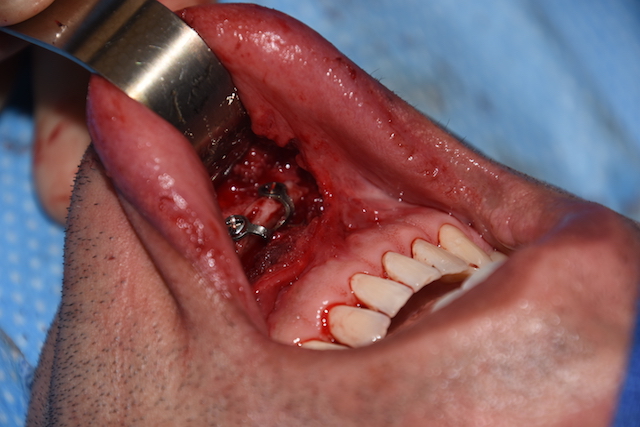 Background:  The most common chin reshaping procedure is the placement of a chin implant. Its most common use is to increase the horizontal projection of the chin. But the placement of an implant may not be the end of the patient’s aesthetic chin reshaping desires or procedures. Some patients will go on and seek additional procedures to change other dimensions of their chin or modify the initial horizontal projection achieved.

One such dimensional chin change is the desire for reduction of a long chin. The horizontal projection and width of the chin may be satisfactory but it makes the lower third of the face too long. Vertical shortening of the chin can only be achieved by two methods, an intraoral wedge reduction osteotomy with plate fixation or an external submental bony shave. Each has their advantages and disadvantages which are influenced by whether other dimensional changes are needed. But in the isolated vertical chin reduction the intraoral technique is usually preferred.

In rare cases of patients seeking vertical reduction of their chin, they may have had a prior chin implant procedure. It is always possible that their undesired chin length is because the implant was positioned too low on the bone. But this would be readily known as an observable change after the chin augmentation procedure. Otherwise the chin bone is too long and an implant that provides horizontal projection will not have solved it and may even bring additional attention to it.

Case Study: This young male desired to have a vertically shorter chin. He felt that the lower third of his face was too long. Computer imaging was done to determine how much vertical reduction he was seeking of which he wanted as much as possible. A preoperative 3D CT scan showed a chin implant in placed which was positioned high on the bone in the middle third of the chin. He stated the reason the chin implant was originally done was to make his chin wider and only provided minimal horizontal augmentation.

The bone cuts were made in a full-thickness manner and a 7mm wedge of bone removed. The inferior segment of chin bone was then brought upward to close the gap. To replace the horizontal effect of the chin implant the bine segment was also brought forward 2mms. Plate and screw fixation was then applied. The vertical shortening of the chin will always make it look wider as well.

Vertical chin reduction requires an upper and lower horizontal bone cuts in the middle of the chin. The vertical shortening effect is achieved when the inferior chin bone is brought up to close the gap. The amount of vertical shortening is based on how much is removed in the midline. In this case the indwelling malpositioned chin implant provided a visual guide for these bone cuts.

1) Vertical chin reduction in the presence of an indwelling chin implant provides a surgical guide for the osteotomy cuts.

2) The upper and lower chin implant pocket provides a safe line for the osteotomies of vertical chin reduction.

3) The advancement provided by the chin implant can be replaced by bringing the chin forward as well as vertically reducing it.