A chin that sags over the line of the jaw (chin bone) is called chin ptosis. (ptosis is medically defined as a sagging of a body part) While some people have this naturally, most of the time it is due to the soft tissues of the chin sliding downward for a reason. This can occur from simple aging, loss of one’s lower front teeth, and due to different surgical procedures of the chin. A few people actually have pseudo- or perceived chin ptosis which occurs as a result of a natural deep crease below the lower lip (submental crease) which makes the chin look ptotic (particularly when smiling) even though it is not.

Successful correction of chin ptosis can usually be done for those problems caused by prior surgeries. Chin surgeries that are well known to cause soft tissue sagging include the intraoral placement of implants, removal of an overly large implant and bony reductions. Other less common causes include intraoral access for repair of mandibular symphysis and parasymphyseal fractures and vestibular lowering procedures (preprosthetic surgery) in preparation for improved lower denture fit.

Treatment is  based primarily on resuspension or tightening of the mentalis muscles  with or without hard tissue chin expansion. For sagging caused by intraoral access to the chin, the mentalis muscles must be brought back up into their original anatomic position. The intraoral route of access to the chin always divides the upper attachments of the mentalis muscles. (some surgeons put them back well while others do not) This is why the submental (under the chin) skin approach for chin implants is always better with a very acceptable scar and why I use it in my Indianapolis plastic surgery prasctice.  It is not always easy to find good muscle to sew to and this is why a bone-anchoring technique with titanium screws or Mitek suture anchors is my preferred method for a ‘high’ reattachment. 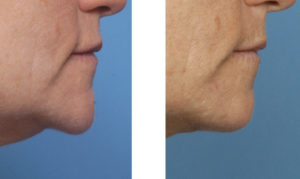 If chin implant removal is the cause of sagging, replacement with a new implant alone may be satisfactory. Or if the patient no longer wants an implant but still desires an augmentation, moving the chin bone forward as a natural ‘implant’ may create enough expansion to fill out and elevate the sagging chin tissues. A chin osteotomy is an excellent opportunity to elevate the muscles as well as the plates and screws used to hold it in its new place are good anchoring points for the muscle. If no further implant is desired then a submental excision with a ‘chin tuck’ is doe for its resolution.

Chin reduction procedures are especially prone to chin sagging problems after. The lower attachments of the mentalis muscle must be divided to access the chin bone. Once the bone is reduced by burring, the muscle and sometimes skin must be shortened and reattached. Usually tightening the muscle across the reduced bone and reattaching it to the muscle on the underside of the chin is adequate. If not, bone holes can be made on the inferior ledge of the chin bone onto which the muscle can be reattached.

The chin is unique in that the mentalis muscle is attached and suspended across it  both above and below the chin prominence. The skin and fat are attached to the underlying muscle and follow its position on the bone. If the muscle sags, so does the appearance of the chin. The key to correction of chin ptosis is management of the mentalis muscle attachments in most cases.