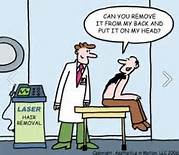 Part of many procedures in plastic surgery create a redistribution effect. For example a facelift relocates sagging tissues from the jowls and neck and moves them back up into a better place. Rhinoplasty takes down a hump and lifts up a low tip. A Mommy Makeover makes the breasts bigger and perkier with tightening and narrowing the waistline. These are just a few examples of how plastic surgery just ‘changes things around’ for a better aesthetic appearance.

Another part of these redistribution efforts is that tissues may also be removed from one area and relocated to another. Historically this is known as grafting and is part of many aesthetic and reconstructive plastic surgeries. A classic example would include cartilage grafting in rhinoplasty from the septum, ear or ribs. The most contemporary example of the redistribution principle in plastic surgery, and one with very wide broad application, is that of fat grafting. Fat can be harvested from a large number of donor site options and placed by injection into any facial or body area that one desires to be augmented. Facial fat grafting is done for a variety of rejuvenative procedures such as lip and cheek augmentation and done with facelift surgery . Augmentation of the breasts and buttocks is very popular as the appeal of using one’s own tissues, and get a simultaneous slimming effect from the harvest, creates a dual benefit.

As this cartoon implies, many people have undesirable things in one body area that would do much better if it was relocated to another body area. Plastic surgery can be seen to have a broad redistribution effect.