Plastic Surgery’s Did You Know? The Myth of Laser Scar Removal 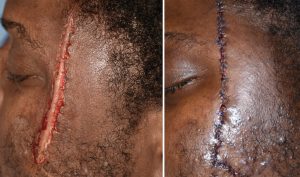 When most people think of scar revision they usually think of two things; elimination of the scar and the use of lasers to do it. The reality is that both of these perceived principles of scar revision are wrong. Scars may be able to be improved but they can almost never be removed. Plastic surgeons wish this was possible but it is not. Once the skin has been injured and healed by scar, it will be forever changed. It is merely a question of how much reduction can be obtained and how much less visible it can be. Secondly, while lasers have a role to play in scar revision it is less significant than excisional techniques. Lasers are not magical wands that work like erasers. They are most effective in prophylactic treatment of early scars and incisions. They will make little difference in well-established mature scars, particularly those that have visible surface contour issues. (wide, deep, raised) Revision of significant scars requires excision and closure, often using geometric rearrangement techniques. Laser resurfacing may then be done after to get the best camouflaged appearance.