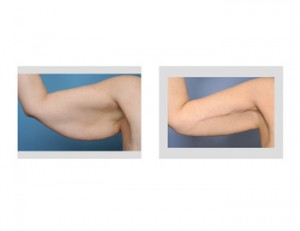 Arm lifts, also known as a brachioplasty, is the most effective procedure to reduce the circumferential measurement of the upper for a profound tightening effect. Because it involves a scar, however, its use is usually restricted to the patient who has drooping ‘batwings’ which usually occurs after significant weight loss in women. But even in those patients who are usually more than willing to accept just about any scar over a very floppy upper arm, it is not clear where the best and most acceptable scar location is.

The excisional location and the resultant scar can have two variables, the location on the arm (inner or back) and the pattern of the scar. (straight or wavy) Plastic surgeons are mixed about where the scar should be placed and numerous surgeons any and all of these possible armlift scar locations and types. There are devout advocates for the different arm lift scars, each position stating that it offers a superior scar result.

In the October 2013 issue of the Annals of Plastic Surgery, a paper was published entitled ‘Optimal Placement of a Brachioplasty Scar – Survey Results’. This study addresses the issue of where  and how to place the arm lift scars based on a population surgery. Using a model’s arm in different position, an arm lift scar was photoshopped onto the inside and back of the arm as well as in a straight line and a sinusoidal pattern creating four possible arm lift scar appearances. Online surveys were then conducted to assess the scar variables and rate them in their visual acceptability between the general public, plastic surgeons and actual patients who had undergone an arm lift procedure. 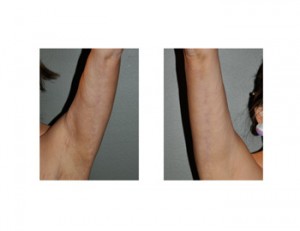 This arm lift scar study is particularly interesting as it goes against what I evolved to over the years. Early in my Indianapolis plastic surgery practice, I always placed the arm lift scar on the inner aspect of the arm. Because of protracted wound healing issues from the thinner skin present there and the appearance of the scar, I switched to a more back of the arm scar location where the incision heals better and with less problems due to the thicker skin. I presumed, although not proven by any scientific study, that the back of the arm resulted in better looking scars and that patient considered that scar location to be the best aesthetic choice for them.

This study conflicts my long held opinion on the arm lift scar. In preoperative counseling on arm lifts, I always ask the patient if they prefer the scar on the inside or the back of the arm..and they almost always universally choose the back of the arm. While this study suggests otherwise, the patient is the best judge of where they want the scar. What the study did not factor in is an intermediate choice of halfway between the inner and the very back of the arm which is my current armlift scar location preference.