The concept of an injectable cranioplasty to augment various areas of the skull has tremendous appeal. Avoiding scalp incisions has an obvious benefit as well as limiting the magnitude of the surgery. Having worked years ago at trying to develop this surgical technique, it was eventually abandoned due to not being able to solve the contour irregularities that developed from injecting a liquid material under the scalp in a blind fashion. There were also issues with the setting of the bone cement used which has been subsequently withdrawn from clinical use.

While injecting large areas of the skull for augmentation is still not a viable technique, technology has improved to allow very small areas to be successfully treated by an injection method. Hydroxyapatite bone cements are now available that in small volumes that have the right flow characteristics and set times to allow them to be injected and contoured externally until set. 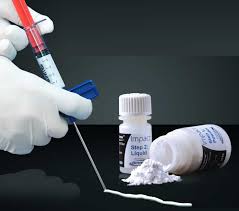 Osteomed’s OsteoVation is a calcium phosphate cement that is highly flowable and, of great significance for an injectable cement, does not wash out and is designed to set in a wet environment. It has a quick set time of less than five minutes once mixed and injected. Biologically it remodels via cell-mediated processes in a mechanical stress-directed fashion instead of dissolving away before bone infilling can occur as with first generation bone cements. 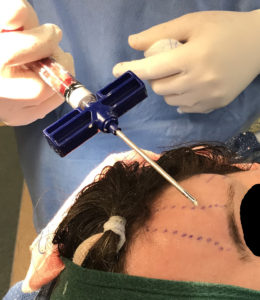 This video shows the flow characteristics of OsteoVation bone cement as well as its use to augment a small forehead contour defect.