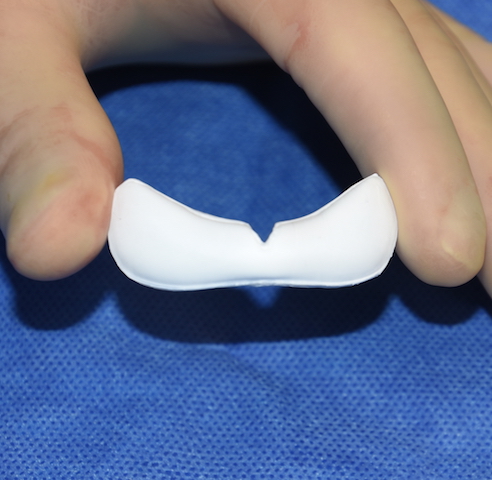 Augmentation of the midface consists of several distinct zones based on anatomic location and their shape. (convexity vs concavity) The most common midface augmentation area is a lateral one, the cheeks, which is mainly about increasing the convexity of the natural bone shape. A less common but equally important one is a central midface zone, the pyriform aperture, which is designed to decreased the natural concave shape of the bone.

The pyriform aperture is the bone that surrounds the central nasal cavity. It has a concave shape as it creates the medial borders of the maxilla and the premaxilla. It has one small protuberance at its midline location known as the anterior nasal spine on which the causal septum rests. Its degree of forward growth influences the projection of the nose, nasal width as well as the profile of the midface. Naturally broader midfaces often have more recessed pyriform aperture regions but such midface recessions occur from congenital deformities from clefts as well as underdeveloped middle growth.

Augmentation of the pyriform aperture region has a long implant history, most commonly performed by various premaxillary, paranasal and pyriform aperture designs. Placement of such implants has been done through either intraoral or intranasal incisional approaches. The original history with this area of midface augmentation was in conjunction with rhinoplasty, particularly in the Asian patient. But it is more widely used today in many forms of central midface recession for profile enhancement. 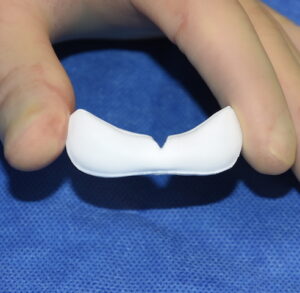 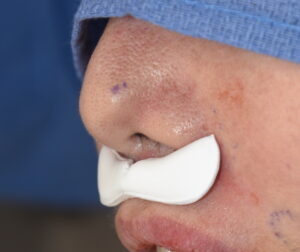 The newest version of a pyriform aperture augmentation implant is that of an ePTFE design. Covering the premaxillary and paranasal the implant material flexible and adaptable to the bone surface. ePTFE is a well known implant material that develops good soft tissue adherence due to its microfibrillar surface. 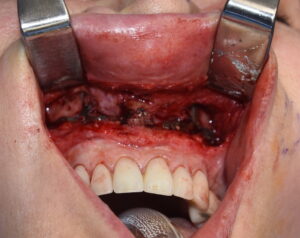 One technique for placement of the ePTFE premaxillary-paranasal implant is from an intraoral approach using a high vestibular incision. The key to this incision is to leave a good flap of muscle and mucosa on the inferior or downside of the tissue above the mucogingival line. This will allow a competent two layer closure over the implant. Wide superiosteal undermining is done superiorly but care must be taken to not violate the nasal mucosa around the edges of the pyriform aperture. 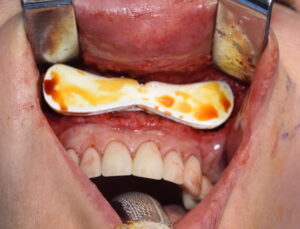 The adaptability of the implant allows it to fit up under the upper lip around the pyriform aperture. At 5mm thickness (large) this is enough to create adequate augmentation under the nose. The implant can be sutured into place with a central alar cinch suture. The alar cinch suture can be used to either maintain the width of the nostrils or to help narrow them a bit. With a three point technique the suture passes through the implant in its premaxillary portion and then tied down. No implant fixation is needed laterally. 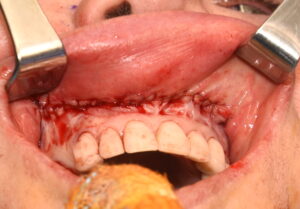 Closure is done with a good two layer closure including both muscle and mucosa. The muscle closure is very important over an implant as mucosa alone is never adequate. IV and postoperative oral antibiotics are given as usual for every implant patient.

The ePTFE nasal base implant is an improvement over prior implant designs in both shape and material.  Its adaptable and flexible material characteristics allows it to obtain a subperiosteal snug fit under the nose and can be secured with suture fixation only.