Reduction of the Enlarged Scapha of the Ear by Wedge Excision 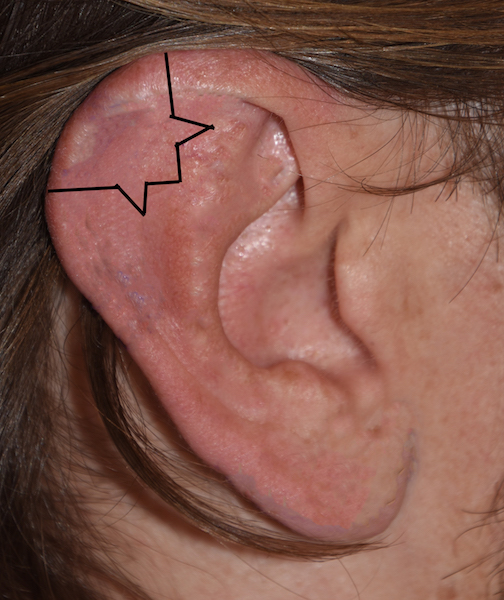 The external ear has a very complex topographic shape which is largely overlooked/underappreciated because it sits on the side of the head. Its variety of convexities and concavities of its cartilage framework create the recognizable ear shape even if one can not describe them in detail. While there are differences in the exact size and shape of these various ear components significant changes of them create a pattern of recognizable aesthetic ear deformities.

One such aesthetic ear deformity is macrotia or a large ear. Typically in the large ear a combination of an enlarged scapha superiorly and an elongated earlobe inferiorly is present. But the enlarged scapha can occur as an isolated deformity. As the distance between the superior crus/antihelix and the outer helical rim becomes wider the upper ear becomes larger. 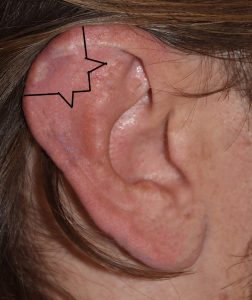 In the December 2021 issue of the Aesthetic Plastic Surgery journal an article was published entitled ‘A Pinch Test to Correct an Unfolded Helix: An Innovative and Predictable Technique’. In this paper the authors describe a wedge excision technique to treat what is described as an unfolded helix. (an upper ear excess) This is when the upper third of the ear is large with a wide gap between the outer helical rim and the antihelical fold. (an enlarged scapha) Their treatment approach is a direct wedge excision, an amount determined by a pinch test which is also used to help the patient preoperatively understand what the result may be. This full thickness skin and cartilage removal will need some accompanying smaller triangular excisions along each wedge line for the inevitable tissue redundancies which will occur perpendicular to it. Their results show nonvisibog notch deformities along the helical rim suture line. (which us always the biggest concern with any excision that involves the helical rim.

The typical approach to an enlarged scapha, most commonly described in macrotia reduction, is a scaphal advancement flap. The excision is done just inside the helical rim, paralleling its length from the top of the ear down to the middle helical region of anterior skin and cartilage. (the skin on the back of the ear is left intact) Then a backcut is done which allows the ear to come together with a reduced scapha and a decreased ear height. This places most of the suture line hidden inside the helical rim with the only visible scar line being a small one that crosses the helical rim.

The wedge excision technique is a direct approach to the enlarged scapha ear reduction which also has a scar line that crosses the helix but at a superior location. It offers another viable technique for scaphal reduction.