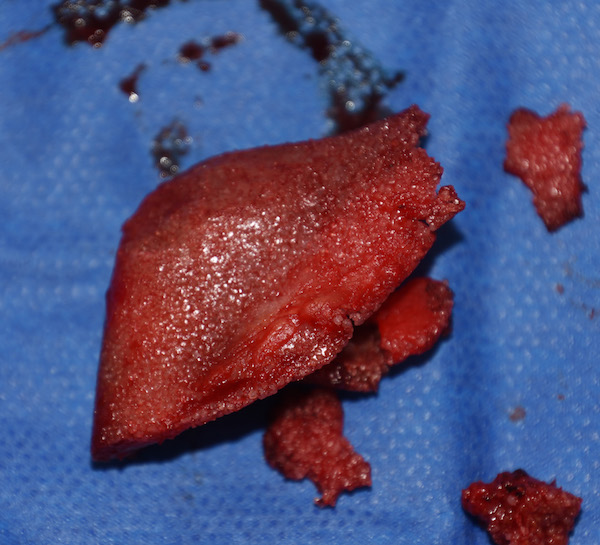 Facial implants are made from different materials, whether they are standard or custom made. The three most common materials are solid silicone, polytetrafluoroethylene (Medpor) and solid ePTFE or ePTFE coated silicone implants. Each material has its advantages and disadvantages, and despite claims by some surgeons, there is no one material that is absolutely superior to the others. It is merely a choice of which of their features and the biologic reaction to them are most indications for what their intended use is.

One implant material feature that is often overlooked is that of ease of removal. Such a feature may seem contrary to the implant’s intended purpose. But when you look at the relatively high rate of the need for implant removal due to the occurrence of aesthetic revisions or replacement, such a material feature should not be overlooked. Facial implants may undergo revision or removal early after surgery or it may be years or decades later that such a need arises.

In this regard solid silicone offers the easiest removal due to lack of tissue adherence. Conversely Medpor is the most difficult to remove due to significant tissue adhesion to it. The concept of difficult removal is relative in that it is so compared to a silicone material. Difficult, however should not he confused with impossible or can’t be done. I have yet to see a Medpor implant that could not be removed and I have removed hundreds of them. 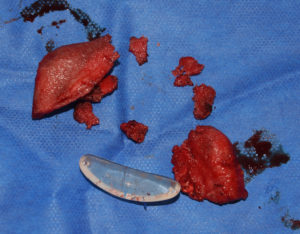 The most difficult Medpor implant to remove is that of the jaw angles. This is already a tough area to operate which poses numerous challenges with any implant placement. But the firm tissue adhesion to the masseter muscles and the tissues below the inferior border pose special considerations. Getting the implant off the masseter muscles poses a risk of postoperative bleeding and hematoma. Along the inferior border closer to the mid body of the mandible lies a crossing branch of the facial artery which crosses right below the jaw and care must be taken during implant removal to not tear the artery. Such bleeding can be difficult to control.

But the one consideration often overlooked is that removal of Medpor jaw angle implant will almost assuredly cause masseter muscle dehiscence. Getting the muscle off the inferior border of the implant will cause disruption of the pterygomasseteric sling if it did not list beforehand.