OR Snapshots – Temporal Implants Placed Through a Browlift Approach

Temporal augmentation has become a popular facial area of augmentation due to injectable fillers and fat. While these injectable methods offer a non-surgical treatment method, their volume retention and smoothness of contour is far from assured.

Temporal implants offer a facial augmentation method that is both permanent and straightforward to place. It is an implant unlike other facial implants as it is intended to augment muscle and not bone. As a result, the implant is very soft and flexible, feeling very much of the consistency of muscle. Another key element to its success is that the implant is placed in the subfascial position and at the subcutaneous level. Sitting on top of the muscle and under the fascia avoids any visible outline of the implant which would occur with eventual soft tissue contraction around the implant had it been placed just under the skin. 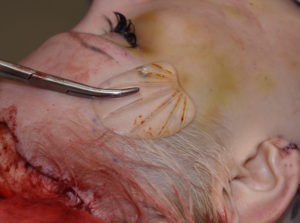 Temporal implants can be used in conjunction with a browlift for a more complete forehead and temporal rejuvenation. The incision for the browlift provides direct access to the subfascial temporal pocket.