Expansion of the scalp through inflatable devices (‘balloons’) is a well established reconstructive technique. Originally developed to treat lost or missing soft tissues (skin), increasing the size of the surrounding tissues to stretch out and cover what has been lost is the fundamental concept of tissue expansion surgery. Such a concept works best in the scalp where a tissue expander has the greatest stretch on the overlying scalp as it pushes off of the hard skull bone.

Tissue expansion also has a role in aesthetic skull augmentation surgery. With the use of 3D CT design, custom skull implants can be made of almost any design or shape. The limiting factor for such implant placements, however, is whether the scalp can stretch enough to accomodate it. In larger skull implant augmentations, a stage scalp tissue expander must be placed to create the necessary soft tissue coverage. 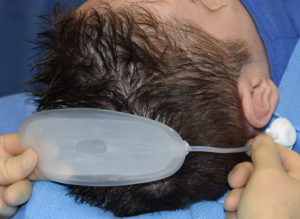 In a first state of a two-stage skull augmentation procedure, a scalp tissue expander is placed through a very small incision. It has a remote port placed just above the right ear where the patient can perform the intermittent injections of saline using a needle at home over a six week period.

Unlike traditional tissue expansions in reconstructive scalp surgery, the amount of scalp expansion needed for larger skull implants is much less. It is usually only necessary to stretch the scalp just beyond the look or size of the skull augmentation that the patient wants.