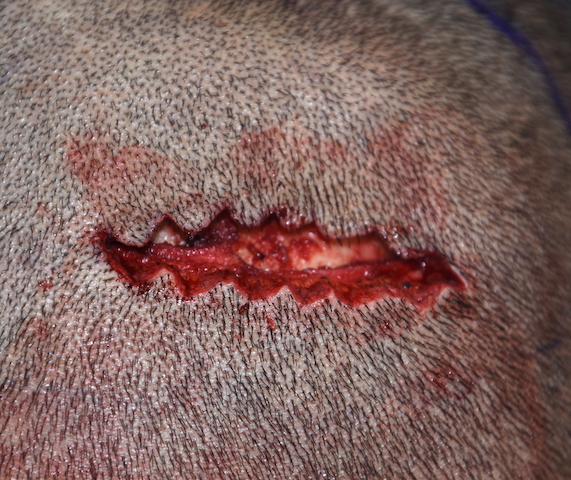 Aesthetic skull reshaping surgery always requires some form of a scalp incision. The incisions may be quite small or moderately longer in length depending upon the type of skull reshaping procedure being formed. Very small incisions (3 to 3.5cms) can be used for operations such as sagittal ridge or occipital knob reductions while moderately longer incisions (6 to 8cms) are used for the insertion of most custom skull implants.

But no matter whether the scalp incision is small or longer, it is very important to have the best looking scar outcome as possible. There are numerous factors that go into how a scalp scar turns out of which the amount of tension on the closure is a major factor. But the one element that is often overlooked is protection of the hair follicles/bulbs which lie beneath the skin. In hair covered scalps loss of hair next to the incision will be perceived  as a wide scar even though the actual scar itself may be quite thin. This is important whether hair is visible on the scalp or not. (most men that shave their heads still have hair follicles, dormant as they may be) 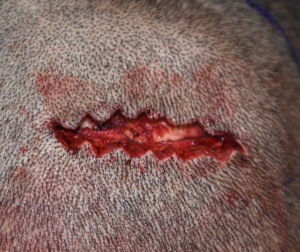 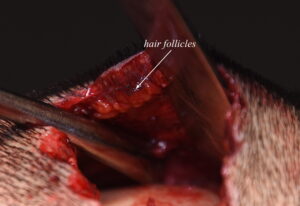 Whether it is making the incision or cutting through the layers of the scalp down to the galea, electrocautery should to be used. Only a a ‘cold’ scalpel or scissors are used to avoid thermal injury to the hair follicles. Only at the galeal or periosteal level can electrocautery be safely used. 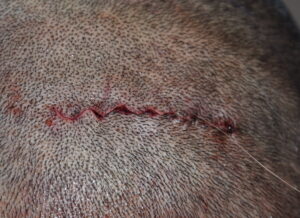 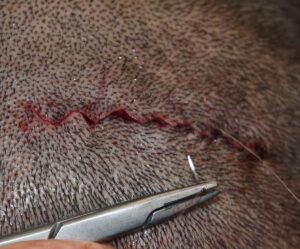 On the way back out with closure, sutures should only be used at the galeal and superficial dermal level. A two layer closure in the scalp is usually all that is needed. By putting sutures at these two very different levels strangulating hair follicles in the sutures is avoided. The galeal suture provides the strength of the closure while the superficial dermal suture (usually 5-0 plain or mild chromic) brings together and levels the outer skin edges. The skin closure suture takes a superficial and not a full-thickness skin bite. Staples and sutures that need to be removed are avoided in most cases.

The question is not whether a scalp incision will leave a scar, but rather how much its appearance can be minimized. Preserving the hair follicles is an important element of this scar minimization process.