Reduction of a large chin is far less frequently done than chin augmentation. And it is a procedure that is highly gender influenced, more women have it done than men. As a result, information on chin reduction is less available including the various techniques used to perform it.

Like chin augmentation and in selecting how to perform it, the key in chin reduction is what dimensions need to be changed. Considerations must be given to whether the excesses exist in vertical length, horizontal projection and transverse width. Many larger chins are a combination of multiple dimensional excesses. But the identification or diagnosis of what dimensional reductive changes are needed will correctly identify the correct procedure needed to treat it.

One type of an isolated dimensional excess is in the vertically long chin. The chin appears too long but has satisfactory projection and width. Reducing vertical macrogenia can be done on of two ways, either from an intraoral wedge ostectomy (combined osteotomy and ostectomy)  or from aubmental osteotomy or shave. Each vertical chin reduction method has its advantages and disadvantages.

The intraoral vertical chin reduction technique is scarless and employs an oteotomy approach very similar to that used in a traditional sliding genioplasty for horizontal advancement. An initial low line osteotomy is done carried back along the jawline. This is followed by a second higher osteotomy line at the distance in the midline of the amount of vertical chin reduction that is needed. It is important to keep the first osteotomy cut low so that there is adequate room beneath the tooth roots and mental nerve exits to allow the desired bone removal to be done safely. These two osteotomy lines will meet the first lower line back along the jawline, hence why it is called a ‘wedge ostectomy’. 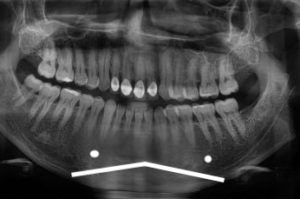 A traditional panorex x-ray can be used to preoperatively determine how much of a bony wedge can be safely removed by simple linear measurements. (white line = bone removal pattern, white dots = mental nerve foramen)

The intraoral vertical wedge chin reduction is appropriate for those patients that want to avoid a submental scar and enough bone can be safely removed within the limits of the location of the tooth roots and mental nerves.