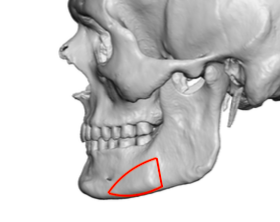 The shape of the jawline can be changed by a variety of bone reshaping procedures. Some of these procedures are for augmentation purposes (sliding genioplasty, chin wing osteotomy) while others are for jaw reduction. (v line surgery) These technique are usually for an overall jaw size change, not necessarily changing its shape while keeping it the same size. 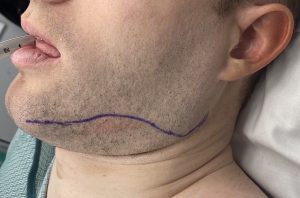 While a non-linear jawline is relatively easily achieve in a custom jawline implant design, how to do so in a natural jawline is not well known. This can be done by bone removal between the chin and jaw angles in the body region of the mandible. The outer cortical layer of bone is removed between the anterior edge of the masseter muscle and up to the level of the mental nerve. There are limitations as top how much bone can be removed based on the tooth roots and the location of the inferior alveolar nerve which courses through the bone. 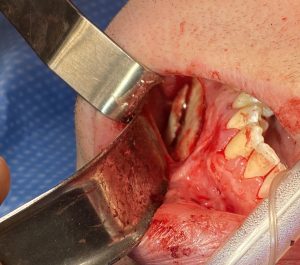 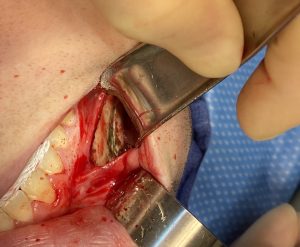 Through an intraoral vestibular incision a reciprocating saw is used to make an angle full-thickness cortical bone cut down through the inferior border. Osteotomes are then used to separate this cortical layer from the marrow space of the bone below it. Bone wax is used to cover he exposed marrow space to control bleeding as well as prevent any regrowth of bone.How much inward curve of the jawline is achieved depends, partially on the thickness of the bone that can be removed, but also on how prominent the chin and jaw angles are.