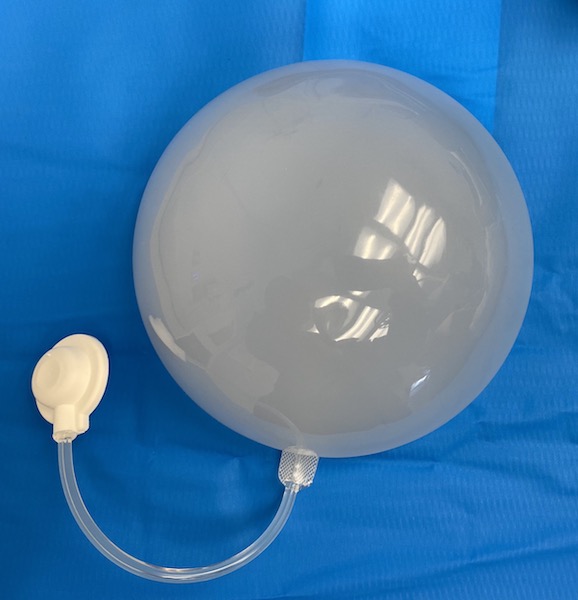 The use of tissue expansion is a time honored technique in plastic surgery for scalp reconstruction. With loss of hair-bearing scalp due to trauma or oncologic resection stretching out  the surrounding scalp to provide coverage for what was lost is one of the original uses of the tissue expansion concept. Its works particularly well in the scalp because the solid surface of the skull allows the push of the tissue expander to be 100% transferred to the overlying scalp.

The use of scalp tissue expanders also has value in aesthetic skull augmentation. In larger skull augmentations the tightness of the scalp is a limiting factor. Once the needed volume of the skull implant exceeds 150ccs or so, the scalp is unlikely able to stretch to accommodate it. The initial placement of a tissue expander can get past this soft tissue coverage limitation. 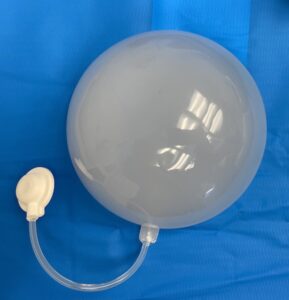 When placed as a first stage procedure in preparation for larger skull implants, it is used somewhat differently than in traditional scalp expansion. The major difference is that the amount of expansion only needs to be enough to allow the skull implant to be placed with minimal tension on the incisional closure. A good correlation is that the expansion volume should match the implant volume which is always known due to the custom design process. 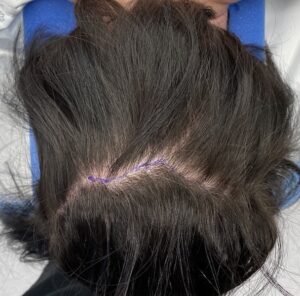 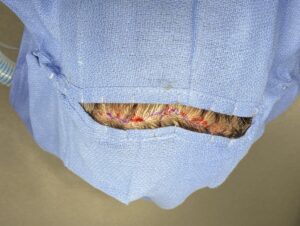 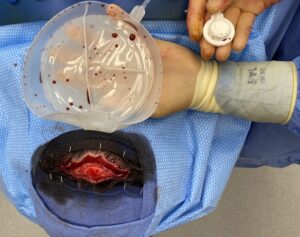 The incision is made parallel to the hair follicles which angle acutely downward on the back of the head. Once down on the bone long dissectors are used to create the subperiosteal pocket on the bone and on the deep temporal fascia on the sides of the head. The largest round diameter expander should be used which in the scalp is in the 13 to 14 cm range. It allows for far more volume expansion that would ever be needed. (up to 550ccs) 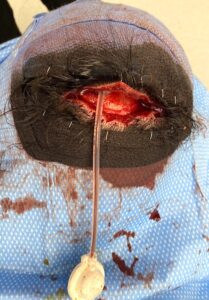 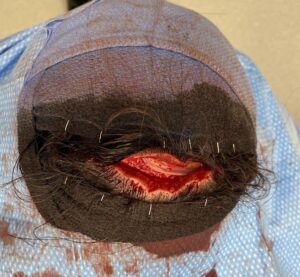 The major challenge is in getting the tissue expander through an incision which is much smaller in length than the expander’s diameter….and then getting the expander laying completely flat. The remote postmarks the middle of the expander and initially is outside the pocket. It is then placed way to the side and placed just above the ear on the deep temporal fascia. (right ear for right handed patients and left ear for left handed patients) This allows the patient to have visible access particularly if they are to do their own inflations. (which most do)