The reduction of skull lumps and bump is a not uncommon request in skull reshaping surgery. Raised areas of the skull can occur for a variety of reasons although the most common is congenital, being just the way that the skull formed.

One unique type of skull lump is not really a lump at all. Known as the parietal eminence it develops from the parietal bone. This skull bone is situated on the sides and roof of the skull, is quadrilateral in shape and has four borders and four angles. Its external shape is convex and near its center is the parietal eminence from which it is formed by ossification. This ossification process begins about the eighth week in utero and gradually extends outward in a radial pattern from the eminence to the margins of the bone.

Because the parietal eminence is the epicenter of the parietal bone it can appear as a prominent bump. Roughly the size of a quarter it can discerned in oblique profile views and, even with hair, can be easily palpated. 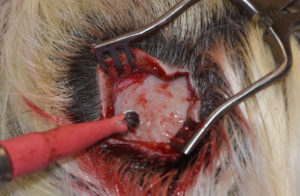 Parietal eminence skull reduction is a form of ‘spot’ cranioplasty. Using a handpiece and drill the prominent high spot of the bone can be satisfactorily reduced. In doing so there are two key components of the procedure. The first important technique is how the bone is reduced. A small skull problem deserves a small incision. Using a high speed handpiece and burr around hair through a small incision runs the real risk of getting hair entangled and pulled out  by the rotation of the burr. Guarding the full length of the burr with a rubber guard allows a smooth reduction to be safely done without risk of hair injury. 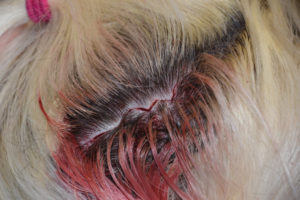 When making an incision for parietal eminence skull reduction, the incision need to be vertical in orientation and only about 4.5 cms long. But rather than just a straight line, it is aesthetically better to create an irregular zigzag line with a few sharp angles placed between the visible hair shafts. This allows the incision to heal amongst the hair in the most inconspicuous manner.

Parietal eminence skull reduction is a very effective procedure that can be done with limited scalp and hair trauma that leaves an inconspicuous scar.