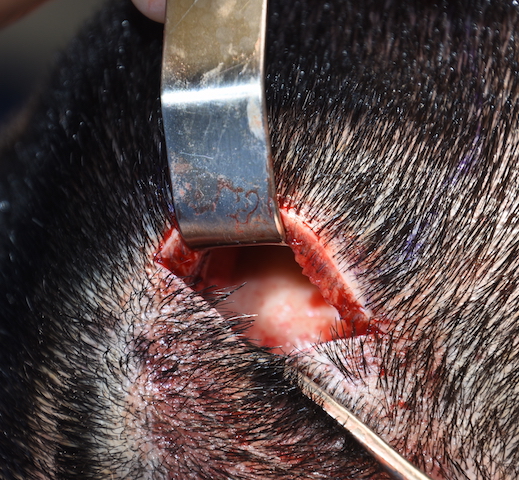 One of the more common aesthetic skull reshaping procedures is that of the sagittal ridge or crest. This is a raised area of midline bone that occurs due to a thickened sagittal suture line. It almost always starts posteriorly and extends a variable distance forward. Most of the time its height decreases back to normal at the mid portion of the suture line. Some may call this a form frusta sagittal craniasynostosis.

But regardless of why it is there it is bothersome to the male who has it as it creates a visible disruption of the smooth convex profile of the top of the head in the frontal view. A peaked head shape appearance occurs that, while often being only 5mms or so high, is enough of an aesthetic distraction that some males seek its reduction. 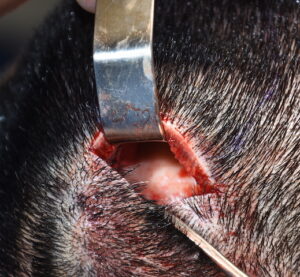 Like all aesthetic operations sagittal ridge skull reduction must take into consideration that the incision used to treat it must not be an aesthetic liability. This potential issue is overcome by only using a incision that is not much wider than the sagittal ridge itself. Through this small scalp incision a subperiosteal tunnel is created through which the bone reduction can be done.

This tunnel technique requires special retractors to allow the needed scalp retraction and the space need to allow the burring instrument to be introduced. Starting at the back end of the elevated sagittal ridge the depth of the reduction is established. Once that level is obtained the amount of bone reduction is carried forward until its front end is reached. 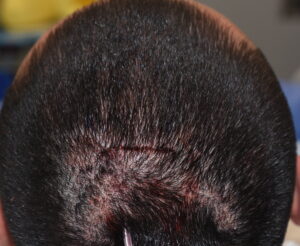 Once the burring reduction is completed a drain is placed and the small scalp incision is closed. The drain is needed as any blood accumulation will add to the postoperative swelling and may be a stimulus for some bone formation. The drain is removed the morning after the surgery. The small scalp incision usually heals extremely well and results in an inconspicuous or near inconspicuous scar even in the male who shaves his head.