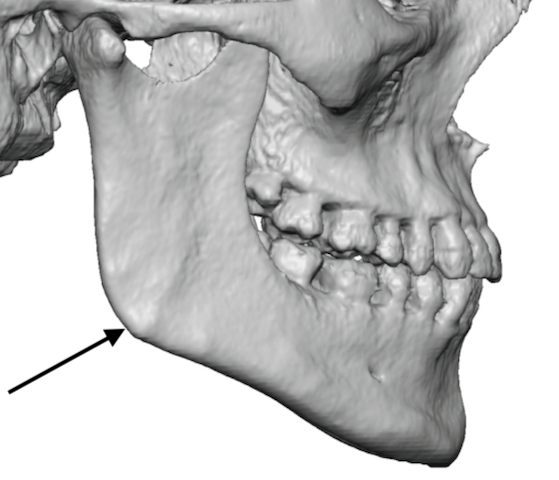 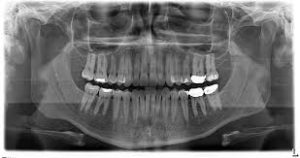 The most common perception in the shape of the bony angle region of the lower jaw comes from either skeletal models or panorex x-rays. It is usually seen as a relatively flat region with a gentle curve of the bone around the back of the angle. It is not given much credit for having any significant anatomic shape variabilities  as there are historically no real clinical procedures that strive to change it.

Sagittal split ramus osteotomies may split the ramus down the middle but the shape of the bone is largely irrelevant to the execution of the procedure or what it is intended to do. In V line surgery as a portion of the jaw angle and body bone is removed, its shape is not particularly important, given it will be altered in a reductive maneuver.

But when augmenting the jaw angle area with custom jawline implant designs its preoperative shape becomes very relevant. In looking at thousands of 3D CT scans of the lower jaw I have come to appreciate the many different topographies of the bony jaw angle shape and have developed a better appreciation of the masseter muscle-bony jaw angle relationship. Together the bone shape and the muscle thickness create the external appearance of one’s jaw angles. From these many 3D radiologic observations I have come to several preoperative and intraoperative observations about the jaw angle and how to change its shape. 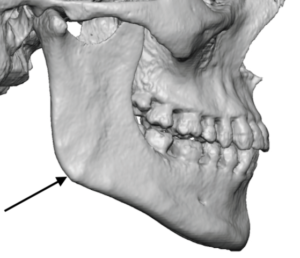 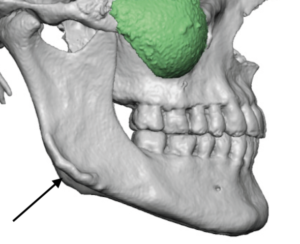 One of the keys to getting a standard jaw angle implant or custom jaw angle or jawline implant into proper position during surgery is elevation of the masseter muscle at the subperiosteal level. In some cases the muscle only needs to be elevated down to the inferior and posterior border edges. In other implants the masseteric muscle sling must be lifted off the bone so the implant can make a new jaw angle shape that is lower. In either case the strong osteocutaneous ligaments will be encountered. They are seen in every 3D CT scan and are the raised bony ‘bumps’ seen around the bony angle. In some cases these attachments are so strong that the inferior border has a raised rim of bone around the whole angle. These indicates that these will be more difficult to elevate (I did not say impossible) and the risk of a muscle dehiscence is higher. 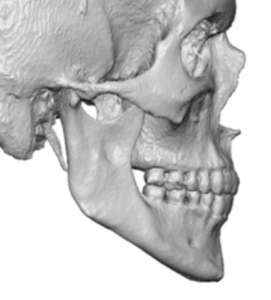 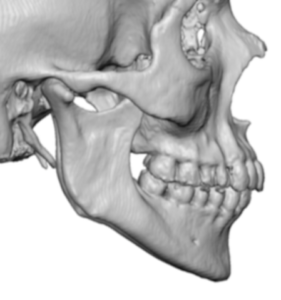 In other cases the bony angle will be smoother with less obvious ligament attachments. The masseteric-pterygoid sling will be easier to elevate with less risk of creating a sling tear in these patients. Women and men with higher jaw angles tend to have less pronounced ligamentous angle attachments. 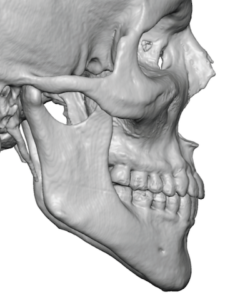 The shape of any bony jaw angle is not square. Even in patients with very square looking jaw angles the bone itself is not square. The actual bony jaw angle as measured between the intersection of the posterior and inferior border lines may be less obtuse ( a normal or low jaw angle shape), but it is never square. It is always rounded at the gonion. This is very relevant in implant design which indicates that there is no aesthetic benefit to making the jaw angle a sharp 90 degrees. This is not natural and the muscle did not develop to fit over a square shape. Keep the jaw angle design more rounded at the gonion which, interestingly, is described cephalometrically as the apex of the maximum curvature of the lower jaw. 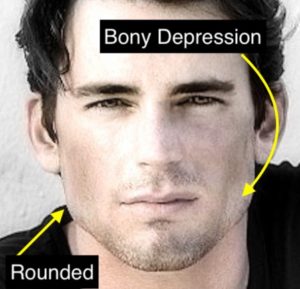 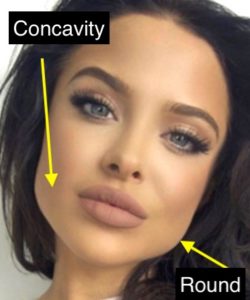 If the natural bony jaw angle is not square then how does one create a more square looking lower jaw? First the concept of square should be replaced with increased jaw angle prominences. No matter what type of model jawline image you can find, male or female, their jaw angle shape is not square. It may be prominent but it is still rounded at the back end. Secondly there is an inward indentation or depression in front of it. This makes the border profiles of the bony jaw angle more evident. This is where the thickest part of the muscle sits on the side of the jaw angle away from the bony borders. In looking at the 3D CT scans this recess commonly exists but has never been given an actual anatomic name. I will call it the muscle fossa as this more central bony area sits lower than the surrounding border bone. 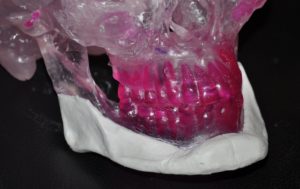 The implications are in jaw angle implant designs that the shape of the jaw angle should not just be a straight line back from the chin to the widest jaw angle point. Rather there should be greater topography to the jaw angles with a raised external oblique line anteriorly almost at the level of the posterior border bone and a recess or fossa between them for the lay of the muscle. I believe this design approach has the best chance to create a prominent jaw angle that does not appear unnaturally square.