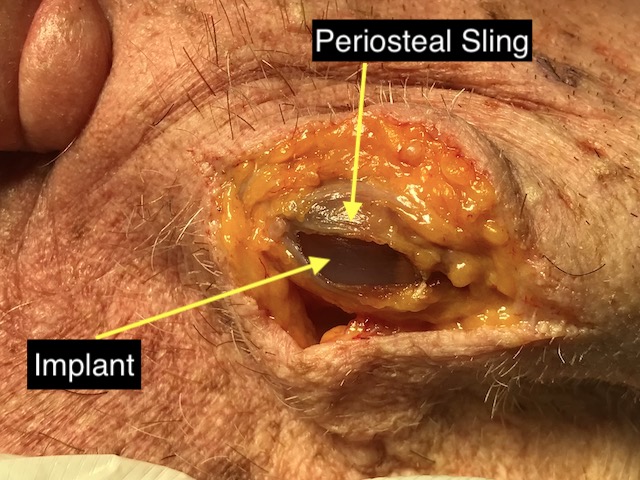 The placement of any facial implant always involves the elevation of the overlying soft tissue as they are placed in the subperiosteal plane. (with the exception of temporal implants) Within this soft tissue lies muscle which is lifted away with the soft tissue elevation. Usually this muscle tissue in the released/elevated soft tissue has no clinical significance to the aesthetic outcome and does not affect the function of the muscle either.

The lone exceptions to this inconsequential effect on the muscle by facial implants is in the lower jaw. At its three corners (chin and jaw angles) the muscle wraps around the end of the bony projection and the continuity of the muscle may be disrupted with implant placement. By definition in chin implants the origin (intraoral approach) or the insertion (submental approach) of the mentalis muscle must be cut to develop the subperiosteal tissue pocket. During closure the two ends of the muscle are sewn back together. This usually causes no aesthetic issues and rarely has any functional sequelae either. (with the occasional exception of tightness of the chin and labiomental fold from intraoral closures)

But the jaw angle area is uniquely different. Its enveloping muscle layer is the pterygomasseteric sling which wraps around the end (gonion) and inferior border of the jaw angle. But rather than being a thick muscle layer it is very thin over the inferior border where the masseter muscle and lateral pterygoid muscles end. While called a sling this is an inaccurate term since the muscle fibers from either side do not cross over the end of the bone and meet. Rather on the very bottom of the bone edge is only a thin periosteal lining.

When placing isolated jaw angle implants or a custom jawline implant it is necessary to elevate the masseter muscle from an intraoral approach. This elevation comes from the thicker part of the muscle superiorly down to its thinner edge at the inferior border. This is where stout osteocutaneous ligaments are found that must be released particularly if any vertical lengthening of the jaw angles is to be done. This is the key maneuver in the procedure and great care must be taken to try and preserve the integrity of the periosteal lining along he bottom edge of the bone. 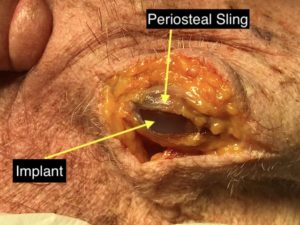 If the thin bottom of this periosteal sling gets disrupted, masseteric muscle retraction may occur. The degree of the retraction depends on the extent of the disruption as well as the size of the implant. While this has no functional impact on muscle function (jaw closing) the aesthetic sequelae is the lack of full soft tissue thickness over the angle portion of the implant. This is seen as two distinct edges externally, a skeletonized implant projection at the jaw angle and a thicker oblique edge line of muscle superiorly. A cadaver dissection of a jaw angle implant placement with the periosteal lining incised using a direct incision over it to demonstrates what happens with masseteric muscle disinsertion. 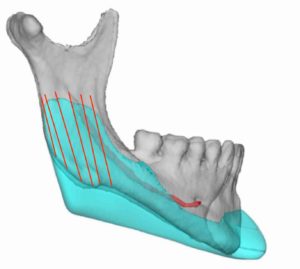 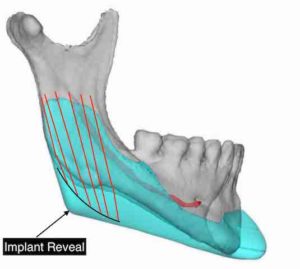 Masseteric muscle disinsertion is easily confused with implant reveal which is an inplant design issue. The bony jaw angle has a rounded shape and not a square one. The width of the masseter muscle is made to match the bone length and shape. If a jaw angle design is made more square the muscle is unable to follow it posteriorly because it does not have the natural width to cover that portion of the implant. In essence the jaw angle tip/portion of the implant sticks out behind the muscle even with an intact pterygomasseteric sling. 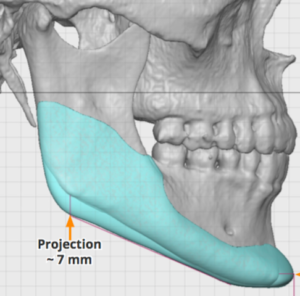 To avoid implants reveal the jaw angle shape needs to be kept more rounded  particularly if vertical lengthening is needed.