The Differing Types and Indications for Arm Lift Surgery

In youth, the upper arm has near equal proportions between the internal bone (humerus) and the skin on the front or back (arm held down by one’s side) or the top or bottom (arm held away from the body) of the arm. With age, the distance on the back of the arm (triceps) elongates and accumulates fat.  This change in the arm with age or weight gain has led to arm reshaping procedures, most commonly known as a brachioplasty.

While once a very uncommon procedure, the armlift (brachioplasty) procedure is done routinuely today. Much of the reason is the popularity of bariatric surgery which has created a lot of loose floppy arm skin, unflatteringly referred to as batwings, as a result of extreme amounts of weight loss. In such large hanging arms, the trade-off of a long scar in the upper arm is very acceptable.

However, in non-weight loss patients where the upper arm shape is not so severely distorted, long arm scars are usually not acceptable. This has lead to the need to use more non-excisional technologies, such as liposuction and other light or radiofrequency-based energies, to help skin contraction. In the right patient, this may eliminate the need for any scars or at the least a much shorter arm scar. 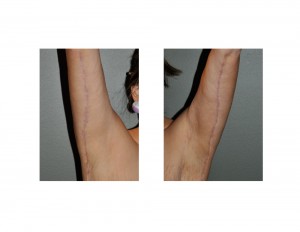 Brachioplasty for the non-bariatric surgery patient (or for the bariatric surgery patient with more modest arm deformities) has evolved to use shorter segments of skin and fat removal. This leaves more limited scars restricted to the upper arm or no further than the middle third of the arm. By tightening the deeper tissues of the upper arm with superficial fascial plication, and using some liposuction, visible improvements in arm shape can be achieved.

What are the criteria that can be used to determine whom is a good candidate for the different types of brachioplasty? Evaluation of the arm includes a determination of how much skin is present and its amount of elasticity and the ratio of fat to skin in the enlarged or hanging triceps area. In addition, it is critical that a thorough presurgical education be done with emphasis on realistic expectations as to how much smaller the arm can be made and the location of scars if excision of skin is needed. 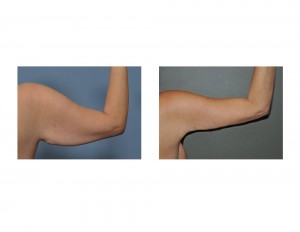 A large amount of loose skin and a minimal amount of fat, which is typical of a bariatric weight loss patient, will require a traditional long scar armlift. Slight skin excess and laxity with little fat may respond to radiofrequency- or high-intensity pulsed light (e.g., SkinTyte) treatments with some modest improvement. These type patients are quite uncommon although many patients wished they fit into this group. Good skin tone with substantial fat (tight arm) may do well with Smartlipo (laser liposuction) alone. The combination of fat and skin excess with mild laxity will probably respond best to a combined liposuction and skin excisional procedure.

Of these options, the mini-brachioplasty (short scar arm lift) requires the most thought and consideration. The limited scar can be either a shorter horizontal scar, restricted to no further than 1/3 way done the inner arm, or an ellipitical armpit removal which results in a fairly hidden scar high up in the armpit. Who best fits this more limited brachioplasty approach? I make that determination based on how the triceps area hangs when the arm is held away from the body at 90 degrees, whether the forearm is held parallel or perpendicular to it. If the lowest point of sag of the arm is located past the central point of the triceps (halfway between the armpit and the elbow) or lower, significant improvement will only be obtained by a long scar armlift. If the lowest point of sag lies central or above, shorter scar armlifts can be considered.