The Effectiveness of Injectable Fat Grafting In Parry-Romberg Syndrome

Parry-Romberg Syndrome, sometimes called craniofacial linear scleroderma, is a are tissue atrophy disease. With a pathologic origin yet unknown it results in the onset of tissue atrophy seen externally as lines of indentation typically associated with the sensory branches of the trigeminal nerve. It s not seen at birth but begins later in childhood or teenage years. It is a disease process that typically burns itself out after years of progression. The amount of soft tissue (and underlying bone) atrophy varies per each patient. Females and the left side of the face are more commonly affected. 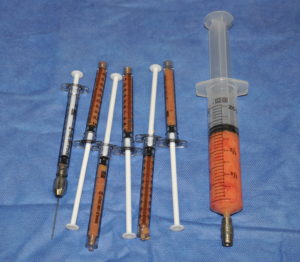 While reconstruction for Parry-Romberg patients has varied over the years, the contemporary treatment is injectable fat grafting. While the same unpredictability of far graft retention applies, it is a preferred treatment because such fat grafting provides pleuripotent stem cells which may be of particular value in this cellular deficient tissue. Because of its cellular composition it may even be a treatment for the early onset of the disease for cessation or limiting its effects.

In the August 2019 issue of the Journal of Craniofacial Surgery an Ahead of Print article was published entitled ‘Comprehensive Three-Dimensional Technology Strategies for Autologous Free Fat Graft in Parry-Romberg Syndrome.’  In this retrospective clinical study the authors performed an assessment of the fat grafting results in nine (9) patients who had Parry-Romberg syndrome. Based on 3D volumetric facial analysis their surgical outcomes were assessed by volumetric measurements of the upper, middle and lower face. They were then collectively used to create a 3D printed fat graft guide.

Using the type of volumetric results they obtained, they postulate that it is possible to predict beforehand in Parry-Romberg patents what type of results they can expected by preoperative computer imaging. Nine patients, of course, do not really provide enough of a sample size to generate averages of the wide variability results that can occur with injectable fat grafting. But at the least this study provides further documentation of the value of fat grafting into the atrophic facial tissues of the Parry-Romberg patient.