The Evolution of the Natural Rhinoplasty

Rhinoplasty is among the most frequent plastic surgery operations of the face. Due to the prominent position of the nose, dramatic improvements in appearance can be accomplished by surgical nose jobs. Rhinoplasty has a long and distinguished history as a reconstructive procedure for more than two thousand years if Indian sources are taken as a reference. The birth of rhinoplasty for cosmetic purposes, however, is more recent and took place in Berlin after World War I and is detailed in Jacques Joseph’s book  ‘Nasal Plastic Surgery and other Facial Plastic Surgery Procedures’, a true milestone in plastic surgery in general and nose job surgery in particular.

But it was only in the past three decades that the operative techniques of rhinoplasty have experienced the revolution that resulted in the contemporary, natural looking nose jobs. The results are more natural, longer lasting and fraught with far fewer complications than in those maybe not so good old days. Joseph’s original rhinoplasty technique was primarily a reduction of the nose in all of its dimensions. Joseph developed many of his techniques in response to the problems which confronted him. And these problems were primarily large, wide and long noses with humps of considerable proportions as well as wide, often bulbous tips.

A rhinoplasty operation according to Joseph aimed to reduce all of these exaggerated features. As a consequence of the emigration of surgeons from Germany prior to World War II, Joseph’s rhinoplasty techniques were spread widely over the western hemisphere. These techniques were certainly not trivial, but from a surgical standpoint not particularly difficult either, because they aimed to do something all surgical specialties are good at… cutting and removing parts…making it shorter and smaller.

Unfortunately noses do not have a lot of tolerance as far as excessive reduction of any of its components is concerned. This is similar to a house. Once too many of the important beams, gables or other structurally important parts of the framework are cut, weakened or removed, the house will go one to suffer some degree of collapse. The exactly same thing may happen when the rhinoplasty surgeon whittles away more and more of the beams and structurally important parts of the framework of the nose. The collapse may not be evident immediately as the skin needs time to shrink and the load bearing parts now deprived of stability are pulled down by scar and strain. So often the results do not look bad after traditional rhinoplasties, but the collapse due to excessive reduction becomes evident months and years later. As a result the infamous over operated look results…the bridge is too low, the tip too pointy, turned too far upward without a real distinctive break between bridge and tip. More often than not patients breathe with more difficulty after the surgery than before.

The big conceptual quantum leap in the development of modern rhinoplasty procedures was established by Jack Sheen in the mid seventies of the last century. The summary of his experience and concepts in the famous Milestones paper (Plast. Reconstr Surg. 2000 Apr;105(5):1820-5) as well as his book Aesthetic Rhinoplasty meant the beginning of a new era in nose job surgery. More and more it became evident that balancing the nose instead of only reducing it is key to improving results. To this end, very often the framework of the nose, particularly the parts consisting of cartilage, has to be strengthened and augmented instead of destabilized and reduced. 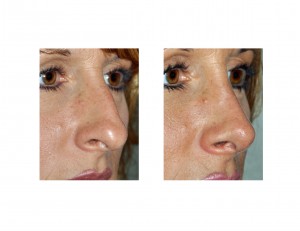 Today’s modern natural rhinoplasty techniques are a skillful rearrangement of the parts of the nose together with techniques to strengthen the critical parts of the framework of the bridge and the tip. Often very little bone or cartilage are removed. Cutting cartilage is avoided and predictable suture techniques reshape the pliable tip cartilages without destroying their structural integrity. Natural rhinoplasty benefited tremendously from improved techniques to transplant the body’s own cartilage, connective tissue or bone into the nose to augment the nose’s framework. The best rhinoplasty surgeons no longer try to make the entire nose small but brings the parts of the nose into a better shape by augmenting what is too small and only reducing what then still is in excess.

Modern natural rhinoplasty achieves more natural results, noses which are more in harmony with the face, noses through which patients can breathe well and most importantly can avoid complications and reoperations to a much greater extent than ever before.