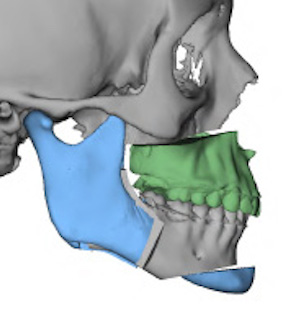 Facial aging is a gradual process that is largely the descent of the soft tissues due to increasing laxity and loss of some of their bony attachments. There is also a component of facial bone loss which affects soft tissue support. Most anti-aging facial surgeries are about resuspending and/or removal of loose soft tissues. (e.g. facelift)  There are few common facial reshaping procedures in which bony support is added back which can have some soft tissue expansion/lifting effects. (e.g., chin and cheek implants) It is not uncommon that chin and cheek implants are done in facelift surgery to work in concert with it for the best facial rejuvenative result. 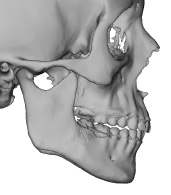 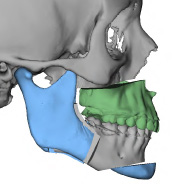 Bimaxillary orthognathic surgery, when it involves advancements or forward movements, is a major expansion of the lower 2/3s of the facial bones. While its purposes in doing so are usually functional in nature it does, by definition, pull the attached soft tissues with it. This has been observed to have a facial rejuvenative effect in some patients, particularly if they are a bit older.

In the June 2021 issue of the Aesthetic Plastic Surgery Journal an article was published in this topic entitled ‘Advanced Facial Rejuvenation After Bimaxillary Surgery in Three Different Facial Types.’ In this paper the authors performed a retrospective analysis of 85 patients (53 females and 32 males) with signs of facial aging who had double jaw orthognathic surgery. Pictures were used to assess whether the preop facial aging improved, stayed the same or became worse. The vast majority of the patients (83 patients, 97%) showed a rejuvenative effect with less soft tissue laxity of the midface, jawline and neck. The authors called this is a successful ‘reverse facelift.’ Two of the patients showed no rejuvenative changes. None of the studied patients developed a more aged looking face.

The so called reverse facelift effect by bimaxillary surgery is a direct result of of stretching out the overlying soft tissue mask. In the middle aged patient it could be predicted that such an effect would occur. This would be particularly apparent in the very patient who would consider or undergo the procedure. (bimaxillary skeletal retrusion) While this would be a procedure for the most motivated its profound change of improved facial bony projection with reduced soft tissue laxity can justify the undertaking.