The Influence of Premaxillary and Paranasal Augmentation on the Nose 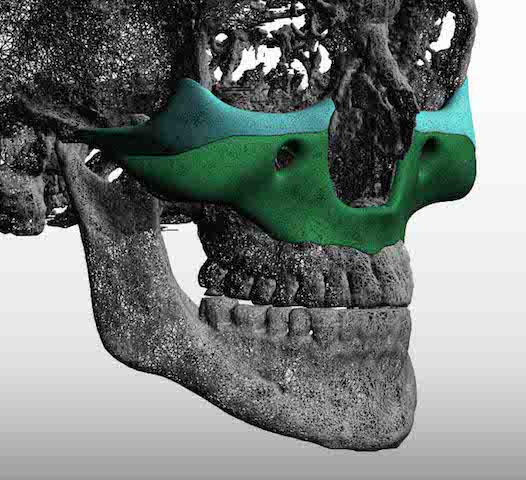 One of the considerations in any type of premaxillary-paranasal augmentation is what are the effects on the nose, specifically its projection. By definition when the bone is moved forward (LeFort I osteotomy) or bone grafts or implants are placed beneath the nasal base there is going to be a forward push on the nostril base and the base of the columella. Whether this merely adds fullness around the base of the nose or actually pushes the nose out or adds nasal tip projection or rotation depends on what actually occurs at the bony base of the nose. 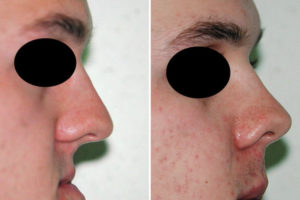 In a LeFort I osteotomy of any magnitude the potential impact on the nose will always be the most profound. This is because not only does the osteotomy line go through the pyriform aperture at its mid-level but also because the nasal septum is released from the anterior nasal spine and maxillary crest. Thus when the maxillary bone is moved forward so is the entire base of the pyriform aperture and the anterior nasal spine. This provides the most complete push on the base of the nose but also at the nasolabial angle. The nose will acquire some increased base projection but with enough forward movement may also develop increased tip rotation. Increased tip projection is not going to occur because the actual length of the medial footplate cartilages and alar domes has not increased. To do so would require actual cartilage grafting of the columella and tip cartilages. 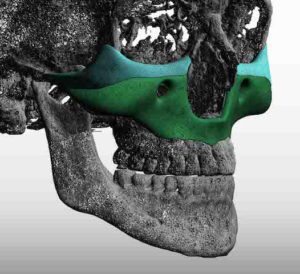 Conversely when implants are placed at the base of the nose, even in complete premaxillary-paranasal augmentation, the base of the nostrils may be pushed forward and the nasolabial angle potentially opened up. But the nose will not develop increased tip rotation and most definitely not increased tip projection. Even in the most complete form of nasal base augmentation, the custom total midface implant, the nose does not develop increased tip projection or rotation.

While premaxillary, paranasal and total midface augmentation is often referred to as having a ‘Lefort I’ like effect, that actually is not a completely accurate statement. Implant augmentation adds fullness around the base of the nose, with a far less invasive surgery than osteotomies, but can not substantially change tip projection and tip rotation like occurs in rhinoplasty surgery or even major orthognathic surgical movements. For those patients who want to avoid these nasal changes when augmenting the base of the nose this provides some solace in that regard. For those patients seeking those specific types of nose changes, a concomitant rhinoplasty needs to be performed with the nasal base augmentation.