The Inverted Nipple – Classification and Treatment 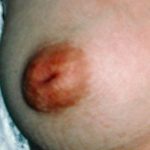 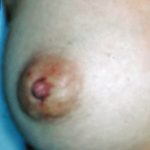 An inverted nipple (also known as an invaginated nipple) is an aesthetic condition where the nipple, instead of pointing outward, is retracted into the breast. In some cases, the nipple will be temporarily protruded if stimulated, but in others, the inversion remains regardless of stimulus or pull. Inverted nipples are not gender specific and can occur in both women and men. They probably occur more frequently in women due to lactation and breast feeding that can cause ductal scarring and contraction.

Grade 1 nipple inversion can easily be pulled or pushed out and does not immediately retract back in. Patients may describe them as occasionally popping out on their own without any effort to do so. This indicates that there is no significant amount of fibrosis or ductal scarring. A Grade 2 nipple inversion can still be pulled out but not as easily as the Grade 1. It differs because it will immediately pull back in, indicating some degree of fibrosis. It never spontaneously pops out on its own. This is probably the most common type of nipple inversion. Grade 3 is the most severe form and can not be pulled out on its own. It is truly stuck down due to fibrosis and also indicates the underlying soft tissue deficiency and ductal deformity. This degree of inverted nipples is associated with an inability to breastfeed and even chronic infections.

Understanding the grade of nipple inversion determines the surgical procedure to correct it. Grade 1 nipple inversions rarely present for treatment as they are partially self-correcting and not that aesthetically distracting. But when they do a simple technique of fat injections into the base of the nipple can work quite well. One can also use synthetic fillers, such as Restylane or Juvederm, but fat injections provide a more assured long-term correction. One to two ccs of fat per nipple is all that is needed.

Grade 2 nipple inversions can be corrected by any of the well described nipple inversion techniques that use an incisional release and internal suturing. Because of the soft tissue defect created as the nipple is released and brought out, it seems more logical to fill this defect with a tissue graft and then suture over it. This will prevent the risk of secondary scar contracture. I have used diced Alloderm (allogeneic dermis) or small fat globules successfully. But when it comes to Grade 3 nipple inversions, it is best to think of a small dermal-fat graft if the patient has an acceptable donor site and will allow it. Otherwise, rolled cadaveric dermis from a variety of manufacturers can be used for insertion into the underlying soft tissue defect.