Making the face more slender or narrow consists of a variety of well known bone reshaping procedures that have origin in Asian facial reshaping. For the lower face V-line surgery consists of jaw angle reduction combined with a chin reduction osteotomy. Most commonly the chin osteotomy is a T-shape, removing bone in a vertical central wedge as well as from the sides to produce a 3D chin narrowing effect. 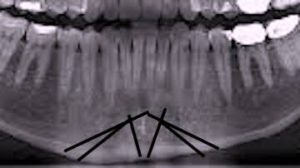 In the November 2018 issue of the Archives of Plastic Surgery an article was published entitled ‘Lower facial contouring surgery using a novel method: M-genioplasty.’  In this paper the authors describe a change in the T-shape osteotomy pattern to that of an M shape. Wedge resections were taken from the midline while lateral wedges are taken from the sides. The wedges were open superiorly in the midline and inferiorly on the sides. The lateral bone segments were rotated and approximated centrally. The lateral mandible bony stepoff was trimmed off for the jaw angle resections.

Over a four year period a total of 36 patients had this modified M-genioplasty combined with jaw angle resections. Good facial contour reductions were obtained and no bone healing issues or infection occurred. The authors conclude that this chin narrowing osteotomy modification creates a more acute chin angle with less risk of bone resorption.